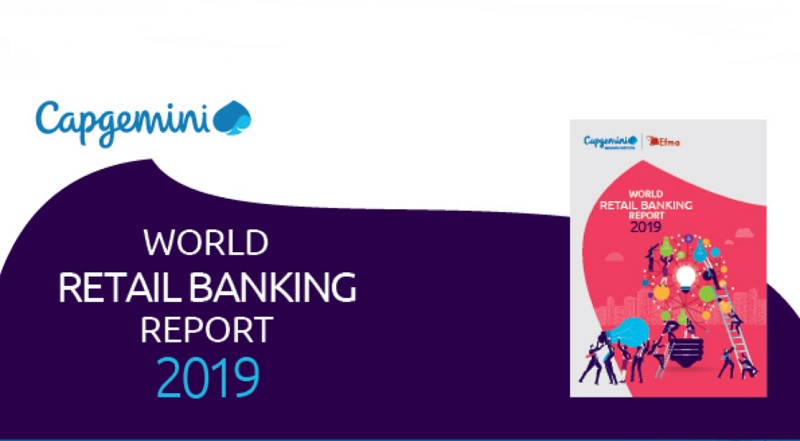 World Retail Banking Report 2019. Banks must collaborate with start-ups to remain relevant as the financial ecosystem evolves from ‘Open Banking [1]’ to ‘Open X [2]’
Retail banks are struggling to deliver a positive last-mile experience [3] as customers demand more comprehensive and personalised banking, according to the World Retail Banking Report (WRBR) published today by Capgemini and Efma.

“In an era of rising consumer expectations, banks are challenged to offer their customers a consistent engaging experience across all channels – branch, web and mobile – and evolve from the Open Banking approach towards an Open X mindset, where banks and new non-traditional players join forces to deliver banking services that integrate with digital experiences,” said Anirban Bose, CEO of Capgemini’s Financial Services Strategic Business Unit and Group Executive Board member. “Banks that identify their top capabilities and then seek partnerships with FinTechs and other business sectors to enhance their offerings in other areas will be the most successful.”

The World Retail Banking Report 2019 outlines where banks are falling behind customer expectations and the steps they need to take to become inventive banks.

Key findings include:
– 75% of tech-savvy customers are currently using at least one financial product from a BigTech [4].
– The top three reasons customers say they turn to financial products from non-traditional players are lower costs (70%), ease of use (68%), and faster service (54%).
– Of customers likely to switch their primary bank in the next 12 months, more than 80% are currently using payments, cards, or banking account products from BigTechs and challenger banks or are likely to do so in 3 years.
– Adoption of Open Banking has been sluggish with only 33% of banking executives saying they have effectively implemented it.
– Open Banking is evolving to become ‘Open X’, where banks and new non-traditional players join forces to deliver banking services that integrate with digital experiences in other parts of customers’ lives.
To become an efficient experience-led service provider in the Open X era, the report further recommends that banks need to become inventive banks by effectively collaborating with FinTechs. Banks need to strategically choose partners that complement product portfolios, enhance service delivery, boost sales – and work collaboratively. By leveraging effective collaboration while also maximising traditional strongholds, banks can create a powerful advantage in the Open X era.

“Even though open banking adoption has been somewhat slow, it and its evolution to Open X, are the best ways forward for banks to compete in the increasingly crowded and diverse financial services landscape,” said Vincent Bastid, Secretary General of Efma. “Open X is how banks will provide customer experience in the future, and not preparing for it now will result in missed opportunities and lower market share.”

Poor customer experience can lead to missed revenue opportunities
Customers are reporting low positive experiences across many banking interactions, with loan and mortgage applications and problem resolution identified as the highest friction (69.3% for mortgage applications and 63.7% for problem resolution) and lowest positive experiences (37.7% for mortgage applications and 40.3% for problem resolution.) Customers reported lower friction but also lower positive experience in the initial stages of the banking relationship such as account opening and information gathering, likely due to lack of omnichannel solutions. For example, a majority of Gen Y customers (71.9%) consider mobile apps as an important banking channel but only a few (32.9%) report a positive experience in this channel. Poor experience at both the initial touchpoints and more complex transactions in a customer’s journey, especially in the last mile, can lead to missed revenue opportunities and call for creation of a robust omnichannel strategy cites the report.

Banks can improve the last-mile experience by addressing customers’ overall financial wellness
According to the report, banks are failing to deliver the experience customers are accustomed to from BigTechs and FinTechs. They cannot ignore raised expectations from younger generations and tech-savvy customers any longer: less than a third of customers believe their bank offers a variety of useful financial apps or timely and relevant product recommendations. While banks are delivering a higher positive experience in more mature channels such as the branch and website, the report advocates that they must ensure a better experience at increasingly popular digital channels such as mobile and chatbots/voice assistants. As non-traditional firms prioritise customer pain points, the areas of payments, cards, and banking accounts are the most vulnerable to losing customers to these new-age entrants. The WRBR highlights that banks can address these challenges by focusing on the customer’s overall financial wellness, rather than discrete banking products.

By building a foundation of strong collaboration, banks can achieve Open X
Open Banking helps firms create a more seamless and integrated customer experience which will be vital to retaining and satisfying customers. However, as Open Banking faces false starts, the WRBR states that it will be critical for banks to take a step further into the future by moving into the Open X phase which focuses on experience.

Moving into Open X means banks will need to change how they approach the fundamentals of their business. The WRBR advocates that banks need to move away from thinking about discrete products to focus on delivering a great overall experience to their customers. Banks need to approach the shared marketplace seeking partnerships, rather than focusing on their own siloed and internal innovation. In the report, the Open X Readiness Index is a method to measure bank’s status to collaborate across the four pillars of people, finance, business and technology. The WRBR also advocates that banks need to move from a compliance-only mindset to a data-driven approach to push the industry to Open X, which will fuel data-use excellence that fosters a seamless exchange of resources, improved experience for customers, and expedited product innovation.

[1] Open banking is a practice that provides secure third-party access to consumer banking and other financial data through the use of application programming interfaces (APIs).

[4] BigTech refers to major technology companies such as Apple, Google, Amazon and Facebook.

Report methodology
This year’s World Retail Banking Report charts the current perspectives and potential evolution of traditional banks amid the continued emergence of BigTech players and challenger banks. It features data from a global survey of more than 7,900 retail banking customers in 20 countries, and data from an executive survey from more than 50 senior banking executives across 30+ markets.

About Capgemini
A global leader in consulting, technology services and digital transformation, Capgemini is at the forefront of innovation to address the entire breadth of clients’ opportunities in the evolving world of cloud, digital and platforms. Building on its strong 50-year heritage and deep industry-specific expertise, Capgemini enables organisations to realise their business ambitions through an array of services from strategy to operations.
Capgemini is driven by the conviction that the business value of technology comes from and through people. It is a multicultural company of over 200,000 team members in more than 40 countries. The Group reported 2018 global revenues of EUR 13.2 billion.

About Efma
A global non-profit organisation, established in 1971 by banks and insurance companies, Efma facilitates networking between decision-makers. It provides quality insights to help banks and insurance companies make the right decisions to foster innovation and drive their transformation. Over 3,300 brands in 130 countries are Efma members. Headquarters in Paris. Offices in London, Brussels, Stockholm, Bratislava, Dubai, Milan, Montreal, Istanbul, Beijing, Tokyo, and Singapore.