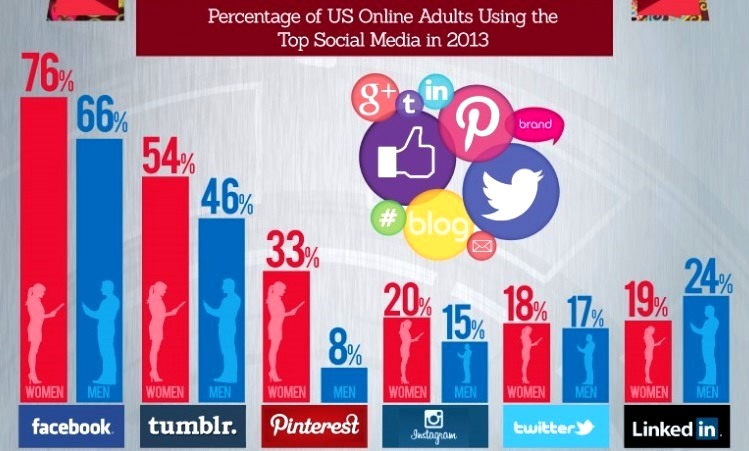 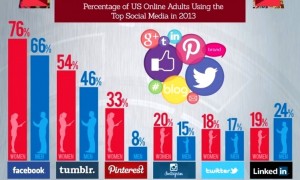 Why Women Are The Real Power Behind The Success Of Pinterest and Tumblr. We had fun checking social media demographics surveys from different credible sources like Pew Research Center and Burst Media and we were able to pluck out some distinct patterns that suggest women are taking over social media and we’ve turned the data into a nice infographic.

The infographic shows that women not only use social media more often than men, but they use these sites in more ways.
More women also use the top social media sites and they dominate the visual-type social websites, which are the fastest growing social networks today. No site establishes women’s dominance in social media more than  Pinterest, where 33% of U.S. women online access Pinterest (for men it’s only 8%).

But more tellingly is how women lead the trend of accessing social media via mobile.
Forty-six percent of women use their smartphones to check their social account versus 43% for men. Likewise, 32% of women use a tablet versus 20% of men for the same reason.
Now juxtapose that to the Business Insider report saying 60% of social media time is spent on smartphones and tablets, and you’ll realize women will be setting the pace towards social mobiles.

What does this trend mean? Nothing much except for the fact that social media is now the top Internet activity, according to Business Insider. Americans spend an average of thirty-seven minutes daily on social media, and more than half of them are women.

Not only that, women interact with brands more often and for a wider range of reasons and they consume and share news more frequently than men, who are likely stuck in news and sports websites.

We can expect more content and brands leaning towards women’s interests. If you’re a marketer you should take these trends seriously to position your messaging. If you’re a woman, this is girl power that you can harness for serious gender issues.