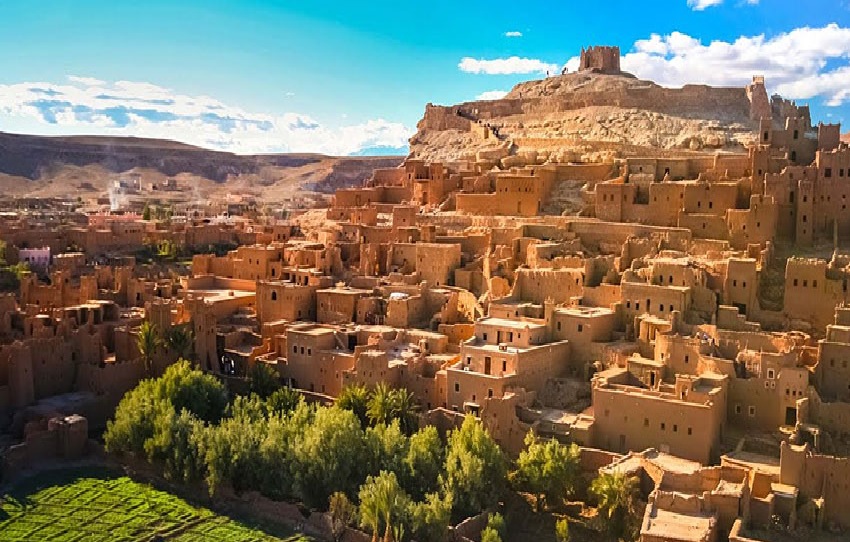 Wastewater to greening desert. Morocco has been using wastewater from the city of Ouarzazate to plant trees to combat desertification and reduce the impact of dust storms.

Planting trees in drylands is tricky, but the Moroccan city of Ouarzazate (known as “the door to the desert”) has taken up the challenge – using wastewater.
The city depends on the El Mansour Eddahbi dam for its water, for irrigation, and also for cooling the turbines and cleaning the mirrors of the nearby Noor solar power plant, the largest in Africa. With these competing demands, there is too little water in the dam to irrigate a new green belt.

“A green belt was necessary to protect the city from dust and create new recreation areas for citizens. It protects the city from desertification and land degradation,” says Hafid Lkibiri, the regional director of Morocco’s High Commissariat for Water and Forests.

Most wastewater in African is not treated or recycled, but Ouarzazate is recycling its wastewater and using it to plant 635 hectares with trees to act as a protective buffer between the city and the desert.
The wastewater is collected from households and filtered in a series of lagoons, before being pumped to the project site using solar power.

The project, which began in 2012 and runs till the end of 2017, involves the close cooperation of the local authorities, the Government of Morocco, and the Republic of Korea Forest Service. UN Environment is coordinating the project and providing technical support.

“We have increased the capacity of our [water treatment] station to treat more wastewater to support the green belt in Ouarzazate and beyond. There is now enough water to maintain the project and even extend it to irrigate trees in the city,” says Mohamed Benassar from Morocco’s Office for Water and Electricity.

Representatives from Ghana, Benin, and Ethiopia attended a workshop in Morocco to share their experience of using wastewater to water trees. All four countries are working with UN Environment to rehabilitate degraded land using treated wastewater.

Mashour Marzak, head of a local non-governmental organization partnering with the project, says his organization had been able to plant trees in local schools and on the streets, and claims that this had also helped boost honey production. “We know that bees are crucial for pollination. We plant trees to produce honey but also to improve our land by fighting desertification and land degradation.”

An unexpected challenge
One challenge the project did not foresee was skyrocketing land prices as a result of the tree planting.

“When we started the project, land was $1,000 per hectare. Recently we approached the same seller because we wanted more land to extend the project and he asked for $60,000. The area is attracting investors and the land value has increased drastically after its rehabilitation,” Hafid Lkibiri says.

Workshop participants said this had been the case in many rehabilitated areas, and was a lesson for similar projects.

The project has also created much-needed employment. Initially it relied mainly on casual workers, but today, more people have longer-term employment planting and cultivating trees in the green belt.

“I work here for the project,” says H’mad, one of the workers employed by a private company to plant trees and protect the green belt. “I earn 4,000 dirhams ($400) per month. I can support my family and send my two daughters to school… People appreciate this project. They come here on weekends with their families to enjoy. This is the only recreation area we have in the city.”

“This [green belt] project is successful because of political support from the Government, ownership and support by the local authorities, civil society engagement and support from the local community,” says Ouarzazate Municipality representative M’bark Ouhloch. “Although this project is small, it has had a big impact on our community. We are happy to share this experience with other countries in the region facing similar challenges with desertification and land degradation.”

The UN Environment Assembly, the world’s highest-level decision-making body on the environment, gathered in Nairobi, Kenya, from 4-6 December 2017 under the overarching theme of pollution.
The Ouarzazate project is clearly one example that shows how with a little creativity waste can feed our future.