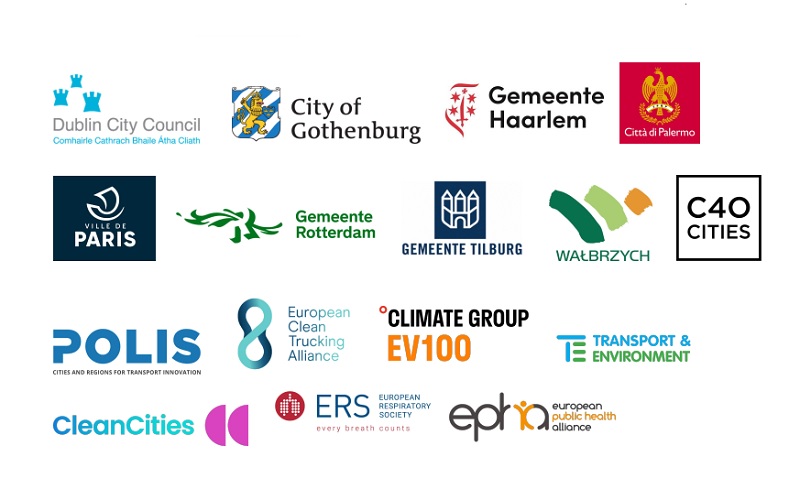 Climate targets for van-makers need to be ramped up to increase the supply of zero-emission vans, a coalition of cities, companies, and environment and public health campaigners have told EU lawmakers.
The group, which includes the cities of Paris, Dublin, Rotterdam, Gothenburg, Palermo, Haarlem, Tilburg and Wałbrzych, also fully support the plan to end the sales of combustion engine vans in 2035. Europe urgently needs to reduce its oil dependency and accelerate the transition to zero-emission mobility.

In a letter to MEPs and EU governments, the group – which brings together more than 600 companies and organisations – calls on lawmakers to strengthen the EU Commission’s proposed van CO2 limits for the 2020s. As currently drafted, the proposal doesn’t require manufacturers to increase their sales of electric vans above a 10% share before the end of the decade.
Cities say that vans need to shift to zero emissions much faster to clean up toxic air and address the growing climate impact of home deliveries.

David Belliard, Deputy Mayor of Paris in charge of transport and public space, said: “Cities need zero emission vans and they need them fast. The proposal from the European Commission that all new vans must be zero emission by 2035 is important – and welcome. But we ask law-makers from the European Parliament and the member states to strengthen the proposal and improve the availability of electric vans.”

Transport and logistics operators, which are part of the European Clean Trucking Alliance, say it’s essential that lawmakers increase the stringency of vanmaker targets and boost the supply of electric vans, which they need to transition to zero emissions.

The EV100 Climate Group, which brings together companies committed to accelerating the transition to electric vans, say businesses need strong policies to support the mass-market availability of zero-emission vehicles for their fleets.

Spurred on by the boom in home deliveries, vans are also the fastest growing road transport polluter with CO2 emissions up 58% since 1990.

Lucien Mathieu, acting freight director at Transport & Environment (T&E), said: “Now more than ever Europe needs to kick its oil habit, which is helping to fund Putin’s war. The EU’s new van CO2 standards are the best way to ensure manufacturers produce more clean, electric vans and at lower prices. But the EU Commission’s proposed targets will mean a lost decade for green vans unless lawmakers raise the ambition.”