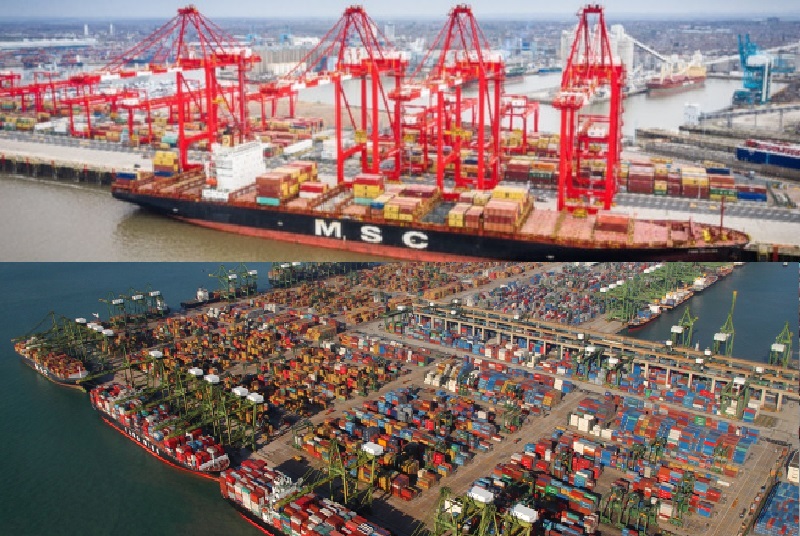 TiL invests in Haropa terminals

TiL invests in Haropa terminals. This ambitious plan will make Port 2000 a major hub for the Northern European range, with the creation of over 1,000 jobs.

Terminal Investment Limited (TiL), which is now the sole shareholder of the TPO/TNMSC container terminals at Le Havre, has announced a major investment programme that will strengthen the port’s role as a gateway to North-western Europe. This €700 million investment will lead to the creation over the next six years of 900 jobs for dockers and 200 for maintenance workers. It will also prepare the port for the highly efficient processing of the world’s biggest cargo ships, including the new generation of 24,000 TEU vessels.

These ambitious modernisation plans are the result of a historic agreement between the dock workers’ union, TiL and the TPO/TNMSC terminals. TiL is MSC’s terminal business and its main shareholders are US Global Infrastructure Partners (GIP) and Singapore Government Sovereign Wealth Fund (GIC).

On the occasion of a visit by Christophe Béchu, Minister for the Ecological Transition and Territorial Cohesion and in the presence of Edouard Philippe, Mayor of Le Havre, Ammar Kanaan, CEO of TiL, highlighted three key elements that have come together to enable TiL’s investment: “Thanks to the assurance of cargo volumes from the world’s No. 1 container line MSC, to the local labour force’s agreement to provide people to support the growth and productivity of the port, and thanks also to TiL’s financial commitment to such a significant investment, this extraordinary endeavour has come to fruition.
By implementing this initiative we will be able to grow and densify our capacity to help Le Havre become an even more significant access point for the French cargo market, and beyond. In order to realise Le Havre’s full potential as a gateway to Europe we are counting on the French government’s support for the development of the related intermodal rail infrastructure that will further enhance the link between our container terminals and European supply chains.
As a cargo port, Le Havre has a long and distinguished history with its roots in the sixteenth century. It is already in an ideal position geographically to provide import and export facilities for continental Europe. We consider that the development of new rail and waterway links will make it even more attractive, driving up the volume of cargo we expect to handle in the coming decades.”

For Edouard Philippe, Mayor of Le Havre and Chair of the Le Havre Seine Métropole city and district council: “An investment of €700m in the port of Le Havre: TiL and the dock workers’ union have reached a historic agreement that will create a thousand jobs and growth that is even more environmentally friendly. This decision confirms and consolidates the attractiveness of Le Havre, offering an opportunity for the competitiveness and attractiveness of the country as a whole.”

TiL is installing gantry cranes, doubling the number at the terminal to 20. TiL will also be tripling the terminal’s storage capacity with the installation of fleet gantries at six berths. The conversion project will be completed by 2028.

The new gantries will be electrically powered and the port will provide shore power for ships. This project, led by HAROPA Port du Havre, will mean ships will not need to use their engines while docked.

Stephane Raison, HAROPA’s CEO and Chair of the Management Board, commented: “We are proud to have worked in confidence with TiL to make HAROPA PORT, France’s leading port, a reference container hub in Northern Europe for MSC and its customers. HAROPA PORT enters a new dimension on the North Europe row as the first port for imports from France and Europe, and the last port for exports at the service of shipper and shipowner customers.”

This investment is in line with the MSC Group’s constant goal of proposing high-performance, multimodal services connected to maritime services. MSC’s market offer now includes river and rail services in order to expand its geographical port customer base and promote an effective alternative to road transport in the present context.

The investment programme includes a key training and security component. MSC is working with the professions to agree on the school and vocational training required, to ensure the right skills are in place to meet the challenges of this exacting project.

Terminal Investment Limited (TiL), a subsidiary of the MSC Group, invests in, develops and actively manages container terminals around the world, often in joint ventures with other major terminal operators.
Since its founding in 2000, TIL has grown to become one of the largest and most geographically diverse terminal businesses globally, with interests in 27 countries on five continents.
TiL’s major shareholder is MSC, and its partner shareholders are the US Global Infrastructure Partners (GIP) and Singapore Government Sovereign Wealth Fund (GIC).
MSC/TiL have a combined portfolio of 70 container terminals, including ongoing projects.

HAROPA PORT. Since 1 June 2021, the ports of Le Havre, Rouen and Paris have formed the “major Seine Axis river and seaport authority”. As the fourth largest North European port, HAROPA PORT has connections to every continent based on an international maritime offering in the very first rank (calling at nearly 620 ports). It serves an extensive hinterland centred on the Seine Valley and the Paris region, together constituting France’s biggest consumer catchment area. From Le Havre to Paris, the port complex can point to 2.5m sq. m. of logistics warehousing currently in service and over 1m sq. m. of available warehousing space. HAROPA PORT provides a transport and logistics system capable of proposing holistic, end-to-end and decarbonised service offerings. It generates annual maritime and river traffic of nearly 110m tonnes, representing approximately 160,000 jobs.