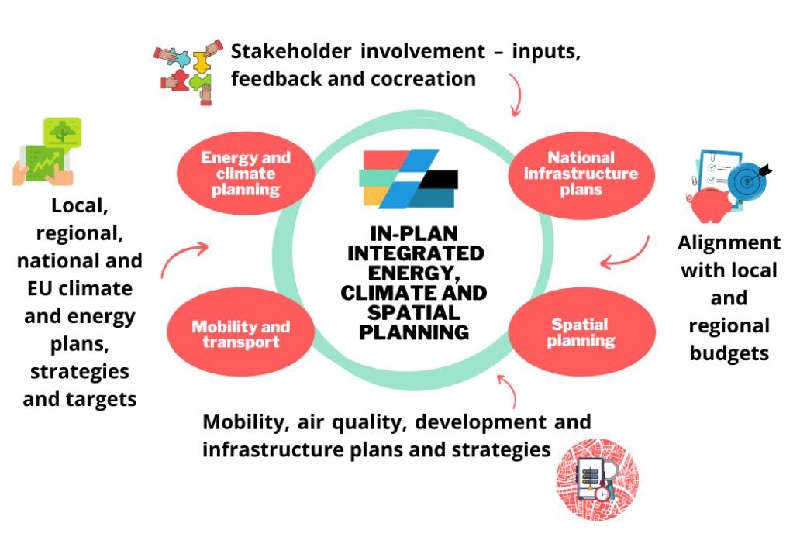 Spatial planning can be a solution to the issues that are now preventing the implementation of the energy transition on national and sub-national levels.

Examples of integration of energy and spatial planning exist across Europe, but they are sporadic, not systemic and rarely linked to local and regional budget lines.
Such challenges highlight the need to adopt a holistic approach and disrupt the silos across municipal departments: the newly-launched project IN-PLAN address this need by developing and testing a framework (called the IN-PLAN practice) in Croatia, Ireland, Italy, Romania and Sweden to then roll it out to other EU Member States (MSs) and regions through a two-stage capacity building programme.

Local and Regional governments play a vital role in the fight against climate change in the European Union
They are directly responsible for enabling and/or enforcing the implementation of national and European legislation into practice as they directly and indirectly control the development of their territories.
However, different issues, such as the lack of binding targets and incentives or the lack of a systemic, integrated, and consistent approach to energy and climate planning hinder the implementation of the energy transition.

Spatial planning comes as a solution to these issues: it refers to the methods used mostly by the public sector to influence the future distribution of people and activities in spaces of various scales.
These legally binding plans are undertaken with the aim of creating a more rational territorial organisation of land uses and the linkages between them, to balance demands for development with the need to protect the environment, increase resilience and to achieve social and economic objectives.

Despite the increased significance of and attention to spatial planning for the EU cohesion, numerous obstacles are still present that hinder the in-depth implementation on national and sub-national levels, as the EU itself has no general competence assigned within this field.
In fact, there is a variety of spatial planning systems across Member States (MS), all of which are rooted in national planning tradition and custom.

Examples of integration of energy and spatial planning exist across Europe, like the city of Lahti in Finland. However, such experiences are sporadic, not systemic and rarely linked to local and regional budget lines.
Such challenges highlight the need to adopt a holistic approach and disrupt the silos across municipal departments and scaling up climate-related public expenditure and finance to avoid longer-term economic costs.

This is where IN-PLAN comes in: this newly launched LIFE project has the objective to empower local and regional authorities to use spatial plans to enact their energy and climate policies, which will result in a higher rate of implementation of climate change mitigation and adaptation projects, including energy efficiency measures.

“Municipalities, cities and regions are at the front line in the fight against climate change, but they need adequate tools and methods to be effective.” Says Tomislav Novosel, REGEA Expert Advisor and Coordinator of IN-PLAN. “By focusing on spatial plans, practices they are already familiar with, we will empower them to implement their strategies and take ownership of the energy transition within their territories.”

IN-PLAN will operate in Croatia, Ireland, Italy, Romania and Sweden to develop and test a framework – the IN-PLAN practice – that will then be rolled out in other EU MS and regions through a two-stage capacity building programme.

First, it will “train-the-trainers” by empowering at least 50 energy-climate and/or development agencies from across Europe. Then, it will pass on that knowledge to local and regional governments alongside the support needed to implement the integrated energy, climate and spatial planning practices.

“Integrating local authorities’ planning practices is the missing link to make green transition a reality at citizens’ level.” Jérémy Cléro, Energy Policy Expert at IEECP, states “IN-PLAN will give these authorities the tool to make the transition happen in pilot municipalities, spread the model all over Europe and align on the Fit for 55 objectives from the bottom up.”

Within 5 years of the project’s end, almost 700 public authorities will be mobilised, resulting in the development, implementation and monitoring of integrated plans which will in turn result in significant energy savings, increase in the production of energy from renewable sources, CO2 emissions reductions and investments into sustainability.
This well fits the common effort for all countries and the EU institutions to advance the role of spatial planning and territorial governance to meet their full potential in contributing to shared EU goals and work with existing planning tools and procedures more effectively, notably those related to economic investment, environment, energy and transport.

About spatial planning
Local and regional governments use spatial planning to outline their development pathways, defining and setting restrictions for land use and development.
Spatial planning is defined as follows: spatial planning gives geographical expression to the economic, social, cultural and ecological policies of society. It is at the same time a scientific discipline, an administrative technique and a policy developed as an interdisciplinary and comprehensive approach directed towards a balanced regional development and the physical organisation of space according to an overall strategy.

– BYinnovation is Media Partner of IEECP