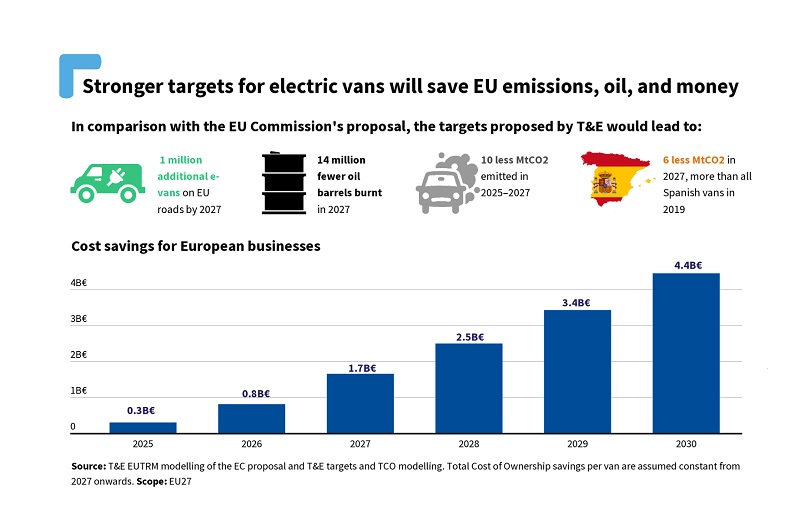 Electric vans are cheaper overall than diesel vehicles, according to a new study of the total cost to buy and operate them in Europe.
So, it’s no surprise that a survey of van buyers in Europe, also published today, finds that most want to go electric.

But the supply of e-van models is lacking, which is why they account for only 3% of sales – lagging far behind battery electric cars (9%).

Transport & Environment (T&E), which is publishing the report and survey, said the supply of electric vans will continue to fall short for the rest of the 2020s unless the EU’s proposed van CO2 targets are significantly increased.
The average electric van is already 25% cheaper per km to own and operate today than the average diesel van, the study finds.
It analyses six countries which account for 76% of new vans sold in Europe: France, Germany, Italy, Poland, Spain, and the UK.

The survey, conducted in conjunction with the costs study to understand buyers’ behaviour, shows the European van market is ready to go electric. Over one-third (36%) of van fleets surveyed already have at least one electric van while almost another third (32%) plan to buy an e-van this year, according to the poll of 745 fleets across Europe by Dataforce for T&E. A further 16% are considering buying an e-van in the next five years.

James Nix, freight manager at T&E, said: “An electric van beats a diesel on cost and van buyers know it. But there’s nowhere near enough supply of e-vans. EU lawmakers can change this at a stroke by increasing the CO2 targets which will require vanmakers to sell more zero-emissions vehicles.”

Despite their cost advantages and strong interest from customers, there is not enough supply of electric vans to satisfy growing demand. The sales of electric vans are rising extremely slowly – just 3% of new van sales were electric in 2021, marginally up from 2% in 2019. The EU’s proposed CO2 rules – which leave targets in the 2020s untouched – don’t require manufacturers to increase sales of electric vans above a 10% share before the end of the decade.

Tightening the EU’s draft CO2 targets during this decade would bring 1 million extra e-vans to Europe’s roads within five years, T&E calculates.[1]
It would also save 5.6 Mt of CO2 emissions in 2027 – equivalent to the total annual pollution of Spain’s vans. Tighter standards would also reduce the annual oil consumption of European vans by 7% in 2027, an important step in ending dependence on Russian imports. More ambitious targets would save European businesses €13.1 billion over 2025–2030 due to the lower costs of running e-vans.

James Nix said: “Electric vans will help cut our oil dependence and save European businesses billions of euros already in this decade. But the drip feed of electric vans on to the market has to end. Member states and MEPs can open the tap and put far more e-vans on the market by ramping up the EU van CO2 targets.”

T&E is calling on EU lawmakers to tighten the proposed van CO2 targets to require a 25% reduction in average van CO2 emissions in 2025, a new intermediate target of -45% in 2027, and -80% in 2030. The European Commission’s plan for all new vans to be zero emission by 2035 is critical. The EU Parliament and environment ministers will decide their positions in the coming months and are set to agree the final targets in summer.