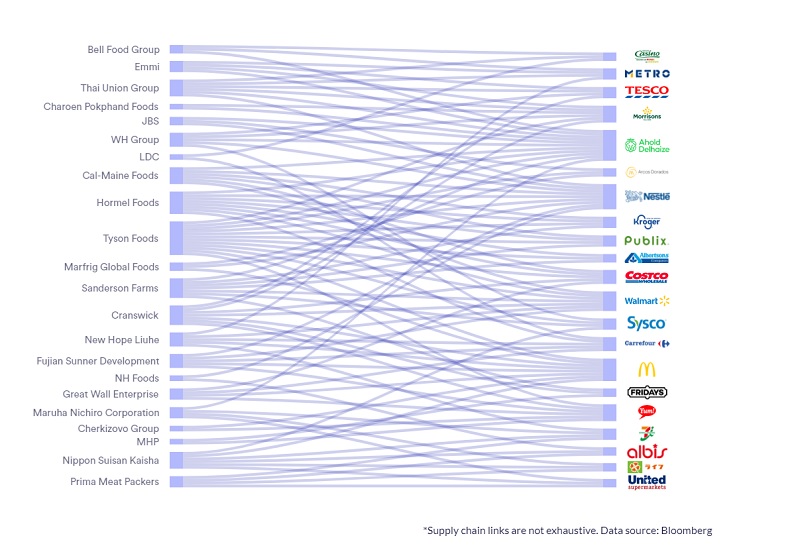 FAIRR Protein Producer Index. Extensive new data published by the award-winning Coller FAIRR Protein Producer Index shows that despite pockets of leadership and innovation the animal agriculture sector is unprepared for the decade of transition on climate change and risks looking “outdated and unattractive”. The Index assesses the firms that supply household names such as McDonalds, KFC and Carrefour.

Key findings include:
– Methane: 0nly 18% (9/49) of livestock producers measure even partial methane emissions, undermining the sector’s ability to play its part in a global deal for 30% methane reductions struck at COP26 this month. Annual methane emissions from global cattle and livestock, make up 44% of global anthropogenic methane emissions and would require a forest covering around three quarters of South America to sequester. New Zealand, Ireland and the State of California have all set methane reduction targets covering livestock of at least 10% by 2030.
– Deforestation: 42 of 45 (93%) meat and dairy firms including San Miguel (Philippines) and Minerva (Brazil) which source soy (for animal feed) from high-risk deforestation areas such as the Cerrado (Brazil), do not have a policy to mitigate deforestation in all sourcing areas. Monitoring of indirect suppliers (those who supply a firm’s direct suppliers) of cattle also remains a problem and misses up to 90% of deforestation. Even companies with a zero-deforestation pledge, such as JBS, Marfrig and Minerva, do not have full visibility of these indirect suppliers. Marfrig report that 53% of its Amazon cattle purchases came from indirect suppliers.
– Leadership emerging: Three Norwegian aquaculture firms are represented in the Top 5 Index companies: Mowi ASA (1st), Grieg Seafood ASA (2nd) and Lerøy Seafood Group ASA (4th), with the highest-ranking meat and dairy firms being Maple Leaf (Canada), Marfrig (Brazil) and Fonterra (New Zealand). Full league table in notes to editor.
– Feed Innovation: With feed prices reaching an eight-year high, driven partly by extreme weather, Nine meat, fish and dairy firms are investing in sustainable feed ingredients or production to de-risk their supply chains. E.g. Cranswick (UK) is trialling feed based on insect protein, peas and beans and JBS (Brazil) have partnered with Netherlands-based DSM to implement a feed additive to reduce methane emissions from digestion in cows.
– Alternative protein innovation: Nearly half (28/60) of Index companies now have exposure to alternative proteins, compared to just a quarter (15) in 2019. Seven meat companies report investments in cultured meat. E.g. Thai Union have formed partnerships with cultured meat start up Aleph Farms and cultured seafood start up BlueNalu Inc; and this month JBS entered the space with a £100m investment in the acquisition of a Spanish cultivated meat firm and a cultivated meat R&D centre.

Jeremy Coller, Chair and Founder of FAIRR, and Chief Investment Officer of Coller Capital said: “The post-COP26 era leaves large parts of the meat and dairy supply chain looking outdated and unattractive. Failures from methane to manure management underline the growing sense in the market that cows are the new coal.
As the largest driver of both methane from human activity and deforestation, the ambitions set at COP26 handed a big slice of responsibility to the food and agriculture sector. We cannot deliver the COP26 commitments without addressing the protein supply chain. More political and regulatory focus on the food industry is now inevitable, but currently only 20% of meat and dairy giants measure even some part of their methane emissions. This should be a red flag to markets given the COP26 commitment to reduce methane 30% globally by 2030.
From class actions to carbon taxes and regulation, investors are using FAIRR’s data to quantify increasing risks in animal agriculture. Carbon taxes for example are expected to cost beef companies up to 55% of current average EBITDA by 2050.
We are at an inflection point and if we are to avoid the meat and dairy sector becoming a stranded asset, we must harness the leadership emerging in parts of the industry and transform the way our food, particularly protein, is produced.”

Eugenie Mathieu, Senior Analyst, Aviva investors said: “The science is clear that to avoid runaway climate change high-emitting sectors such as agriculture must transform themselves in the next decade. Yet FAIRR’s latest research shows how far the food sector has to go. 86% of the world biggest meat and dairy suppliers are still failing to set meaningful reductions targets for emissions, which is enormously unhelpful given that extreme weather events are increasingly hurting the bottom lines of these companies. Investors can play their part by demanding that the animal protein producers they invest in step up to the plate and make change happen more quickly.”

Other findings from the 60-company assessment include:
– Climate change arrives: At least 7 companies have reported climate-related financial impacts. Tyson Foods’ (US) operating income decreased $410 million year-on-year in the first nine months of 2021 in large part from severe weather disruptions. BRF (Brazil) estimates changes in precipitation rates will result in annual losses of up to R$800 million. FAIRR calculates a predicted carbon tax (of $53/tonne) by 2050 would increase costs for beef companies up to 55% of current average EBITDA.
– Climate Risk: 86% of major meat and dairy suppliers fail to declare or set meaningful reduction targets for all greenhouse gas emissions including those in their supply chain (Scope 3). Among companies that report even partial emissions, one in four (26%) saw emissions rise this year.
– Improved targets and processes: 13% have set science-based emissions reduction targets, up from just 7% in 2020. 20% have set net zero targets, up from 7% in 2020. 18% have completed a climate-related scenario analysis, up from 3% last year.
– Methane regulation emerges: New Zealand, Ireland and the State of California have all set methane reduction targets covering livestock of at least 10% by 2030, and more jurisdictions may follow after the COP26 deal. New Zealand dairy producer Fonterra state that, given its environmental restrictions, the country has now reached ‘peak milk’, while Ireland is expected to have to cut its national cattle herd by 20% to meet its target.

Other ESG issues
– Manure: The volume of faeces produced by the world’s 70 billion farm animals is equivalent to double that created by the entire human population – releasing methane and threatening biodiversity and human health. Despite this, 88% (43/49) have no or limited disclosure and commitments on manure pollution. Using methodologies developed by academics, FAIRR has calculated that the animals processed by Tyson Foods (US) (~2 billion annually) alone produce as much excrement as the entire US population.
– Water use: 94% companies are categorised as ‘high risk’, down from 96% in 2020. Of the companies that have water consumption or withdrawal targets, only seven (14%) disclose having set targets at the facility level. They include JBS, Marfrig, Maple Leaf and Tyson.
– Waste & Pollution: 100% companies rank ‘high risk’ – the same as last year. In the US, slaughterhouses discharge the highest phosphorus levels and second highest nitrogen levels of all industrial categories, often into water. Yet none of the major meat producers that operate in the US market have set quality or volume targets on wastewater from their processing facilities.
– Antibiotics: Companies are improving antibiotics use with 62% of companies ranked ‘high risk’, down from 75% in 2020.
– Animal welfare: 63% are categorised as ‘high risk’, improving from 68% in 2020.
– Food safety: 43% are categorised as ‘high risk’, making it one of best performing risk factors. 100% of companies headquartered in Europe and Russia have operations certified by a Global Food Safety Initiative-recognised scheme, compared to only 55% in Asia.
– Working conditions: Only 37% rank as ‘high risk’ versus 57% in 2020, suggesting this has been an area of positive focus in the wake of the pandemic.
– Governance: 52% of companies are categorised as ‘high risk’, compared to 63% in 2020.

Patrick Peura, ESG Engagement Manager, Allianz SE said: “FAIRR data gives investors a highly valuable basis on which to engage animal agriculture companies. The Index helps identify positive examples of leadership – such as investment in feed innovation, effective target-setting and climate risk scenario analysis – which the rest of the sector can learn from. Importantly, the Index also sheds light on the gaps that still need to be addressed in the sector – such as the failure of a majority of companies to adequately monitor, report and manage their GHGs like methane from animal waste. It is critical that investors continue to engage with firms constructively to support solutions in the sector, and the index helps us do that.”

The FAIRR Initiative is a collaborative investor network, founded by Jeremy Coller, with a membership of $45 trillion assets under management. FAIRR works with institutional investors to define the material ESG issues linked to intensive livestock and fish farming systems and provide them with the tools necessary to integrate this information into their asset stewardship and investment decisions. This includes the Coller FAIRR Index, the world’s first comprehensive assessment of the largest global animal protein companies on environmental, social and governance issues.

In 2015, Coller founded the Farm Animal Investment Risk and Return (FAIRR) Initiative – the world’s fastest-growing ESG network. A collaborative investor network with over $40 trillion of assets under management, FAIRR raises awareness of the material ESG risks and opportunities in protein supply chains, helping investors to safeguard the long-term value of their portfolios and exercise influence as responsible stewards of capital.
The Initiative’s work has been widely recognised. In 2021, FAIRR’s Sustainable Proteins Engagement won the SIA Eco-Systems Category Award, and in 2019 FAIRR itself was named Most Outstanding Initiative on Sustainable Animal Agriculture. In addition, the Coller FAIRR Protein Producer Index was shortlisted by PRI for its ESG Research Report of the Year award, and FAIRR has been recognised as a Top 3 Provider of Specialist Sustainable Investment Research by the IRRI Survey.