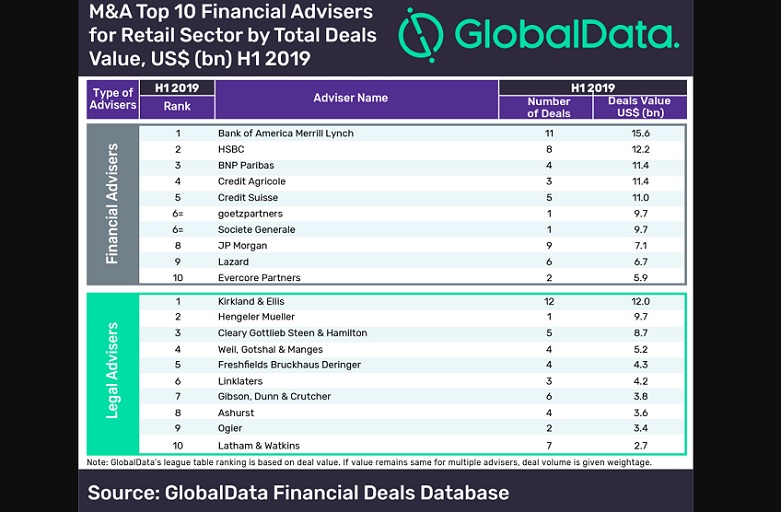 Top 10 retail Mergers Acquisitions. Bank of America Merrill Lynch leads GlobalData’s top 10 global M&A financial adviser league table in retail sector for H1 2019.
Bank of America Merrill Lynch has dominated the latest mergers and acquisitions (M&A) league table of the top 10 financial advisers in the retail sector based on deal value in the first half (H1) of 2019, according to GlobalData, a leading data and analytics company.
The American investment bank advised on 11 deals worth US$15.6bn, including the big ticket deal of EP Global’s acquisition of 100% stake in Metro.

According to GlobalData, which tracks all M&A, private equity/venture capital and asset transaction activity around the world to compile the league tables, HSBC was at the second position with eight deals worth US$12.2bn.
Nagarjun Sura, Financial Deals Analyst at GlobalData, comments: “In the retail sector, six out of the top seven financial advisers were involved in EP Global’s acquisition of Metro for US$9.7bn. Interestingly, legal adviser Hengeler Mueller made it to the second position by advising on this single transaction.”

GlobalData league tables are based on the real-time tracking of thousands of company websites, advisory firm websites and other reliable sources available on the secondary domain. A dedicated team of analysts monitors all these sources to gather in-depth details for each deal, including adviser names.
To ensure further robustness to the data, the company also seeks submissions from leading advisers, through an adviser submission forms on GlobalData, which allows both legal and financial advisers to submit their deal details.

About GlobalData
4,000 of the world’s largest companies, including over 70% of FTSE 100 and 60% of Fortune 100 companies, make more timely and better business decisions thanks to GlobalData’s unique data, expert analysis and innovative solutions, all in one platform. GlobalData’s mission is to help our clients decode the future to be more successful and innovative across a range of industries, including the healthcare, consumer, retail, financial, technology and professional services sectors.