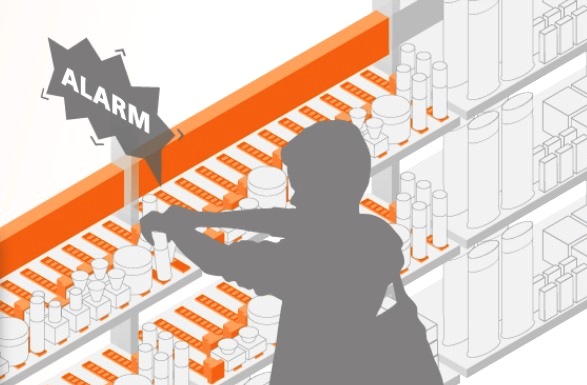 To prevent shoplifting and to track customer behaviour. Stock losses remain one of the most serious problems for retailers. New studies show that loss prevention systems on shelving are becoming ever more popular and effective. They provide effective loss prevention and additional features to enhance the shopping experience.

Last year, German retailers recorded over €4 billion in stock losses
Theft by employees and customers, fraud and organised crime have a debilitating effect on retailers’ profit margins. According to estimates by the EHI Retail Institute, the number of simple shoplifting offences has fallen almost continuously since 1997 but organised crime has dramatically increased over the past ten years. According to the German Federal Office of Investigation (BKA), 25% of all shoplifting is caused by organised retail crime (ORC). The associated willingness to use force has therefore never been as high.

The need for effective and future-oriented strategies and better loss prevention systems is rising. According to EHI, retail invested a total of €1.3 billion last year in various security measures. It states that electronic article surveillance, training store staff, camera monitoring and data analysis are gaining importance. In his current benchmark analysis, Adrian Beck, professor for criminology at the University of Leicester, investigates proven and new loss prevention technologies and provides an outlook for the future of retail security systems.

“Emerging technology” versus “established technology”
In the survey entitled “Emerging Technology in Loss Prevention Retailing” published in 2017, Beck surveyed the largest US retailers on how they grade various loss prevention systems. With participation from a total of 60 top retailers, his survey covers 48% of US retail. He separated the loss prevention systems into “emerging technologies” and “established technologies”. The latter have long been used to prevent shoplifting and are deployed across retailers worldwide. These include, for example, electronic article surveillance and classical video monitoring. “Emerging technologies” are the newest generation and therefore not yet so widely distributed. They include smart shelves and face recognition.

Smart shelf technology is an intelligent shelving system that recognises any customer activity at the shelf. The removal of the product is registered and interpreted. Potential thefts can therefore initiate an alarm and be revealed quicker. By using face recognition technology, shoplifters can be detected again automatically when they enter a shop.

IMCo’s Smart Shelf technology
According to the survey, US retailers see smart shelf technologies and automatic face recognition as the most effective when combating organised retail crime (OCR). Above all, the fight against ORC is characterised in smart shelf technology by effectively deterring shoplifters and immediately alerting the staff. Staff can respond instantly and proactively approach potential offenders. The patented IMCo Smart Shelf has proven itself across international retail chains and has significantly reduced the number of shoplifting offences for the last ten years since its launch.

The IMCo Smart Shelf registers each product removal and identifies atypical multiple removals. In this case, the shelf immediately triggers an alarm. This way suspects can be addressed by store staff in a service-oriented manner, thus minimising the escalation risk. The IMCo Smart Shelf can also be networked with remote alarm options, video monitoring or the public address system, so that goods can be presented openly at all times.

With thousands of installations worldwide at major retailers such as dm drogerie markt, Rossmann Drogeriemarkt, Coop in Norway, Netto in Denmark as well as Lowe’s in the USA, IMCo is now the global market leader in smart shelf technology. Therefore the IMCo Smart Shelf technology is well on the way to becoming “established technology”.

Optimal solution – smart shelves
Smart shelves are becoming more and more important in the current retail market and are the future of effective loss prevention. Besides, stationary retail also have more benefits from the system’s intelligence. Further developments will enable smart shelves to record and analyse customer behaviour. By connecting the cashier system with the IMCo smart shelf, it could be possible to determine more precise conversion rates.
IMCo Inventory Management Consultants e.K.

IMCo is manufacturer of innovative intelligent retail loss prevention solutions that help to sell more and lose less. With thousands of installations on four continents at major retailers, IMCo is now one of the leading producers of intelligent systems that stop theft while maintaining an open shopper friendly presentation. With the IMCo solutions that stop organized retail crime directly at the shelf, fast, measurable results are achieved. The company was founded 2000 in Germany and distributes its solutions through its worldwide partner network.