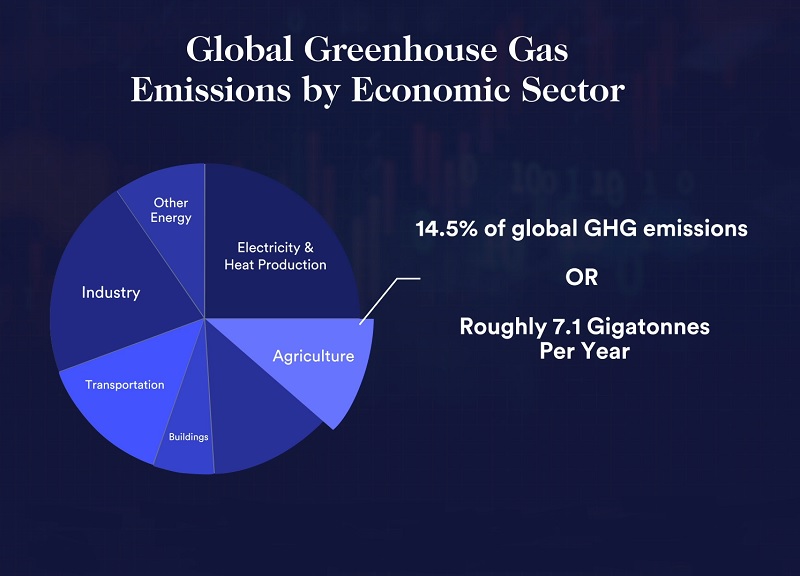 FAIRR builds carbon taxes on meat into its first-of-its-kind financial modelling for 40 global meat giants – and finds high carbon taxes could cost them up to $11.6 billion of EBITDA by 2050.

A new report into the concept of ‘meat taxes’ has found that there is gathering momentum to include farm animal emissions in carbon pricing and other tax regimes, as policy-makers seek to reduce the sector’s harmful impacts on the environment and human health.

The research is produced by the FAIRR Initiative, a global network of investors managing over $20 trillion of assets, who have also built this finding into a tool to help investors price the cost of carbon taxes on agricultural emissions into their valuations of major meat companies. The tool calculates that carbon taxes could cost a set of 40 leading meat companies* up to $11.6bn of EBITDA by 2050, equating to an average impact of 5% of each company’s revenue.

The report entitled ‘The Livestock Levy: Progress Report’ builds on a 2017 White Paper on the issue. Highlights of the report include:
– Policy discussions: The report assesses recent policy discussions on the issue of extra taxes on meat, including a study commissioned by the Dutch Government into ‘fair meat prices’ and the Climate Change Response (Emissions Trading Reform) Amendment Bill in New Zealand which means livestock emissions at the farm level will be taxed within the country’s Emissions Trading Schemes from 2025.
– Ascendency of climate: In the wake of the COVID-19 pandemic (a zoonotic disease that has transferred from animals to humans) the human health issues connected with meat are currently in the spotlight. The report finds that, in addition to these growing health concerns, the environmental impact of meat has become particularly pressing for policymakers, and is likely to create material risks for investors to consider.
– Transition crops: The report says that progressive legislation will likely tie incoming revenues from meat taxes to specific societal benefits such as lower prices of fruit and vegetables or support to farmers to help transition to more climate-friendly produce.

Alongside its report, FAIRR also today re-released its Coller FAIRR Climate Risk Tool, which enables investors to practically apply these findings in their portfolio management.

The Tool uses projections from the IEA World Energy Outlook to conclude that the meat sector could face carbon tax costs of up to $53 ton/co2-e in North America and Europe ($27 ton/co2-e in all other geographies) by 2050. The Tool enables investors to price this, and other potential climate risk costs, into their long-term valuations of food companies.

The updated Coller FAIRR Climate Risk Tool provides analysis on the climate risks facing 40 leading animal protein companies and their ability to mitigate those risks; for instance, by diversifying into alternative proteins. It also enables investors to input their own company data to assess and compare the impact of climate risk on holdings within their portfolios.

Jeremy Coller, Founder of FAIRR and Chief Investment Officer of Coller Capital said, “There’s increasing consensus that we cannot achieve the Paris Climate Agreement unless we deal with factory farming – a sector emitting more greenhouse gases than all the world’s planes, trains and cars put together. That’s driving gathering momentum in policy circles to apply carbon taxes to the meat industry. The New Zealand government has legislated to measure and price emissions from farms from 2025, and there is a clear risk for the sector that other regulators will follow suit. Investors are starting to price this market event into their long-term valuations of meat companies, using FAIRR’s Climate Risk Tool.
A root cause analysis of the COVID-19 pandemic is likely to show the urgent need for the meat and fish industry to improve biosecurity and screening practices. Who pays? In the post-COVID landscape, there is a risk that governments may stop subsidising animal agriculture, and start taxing it instead.”

Karen Lockridge, Director of ESG Investing at Canada Post Corporation said “The Coller FAIRR Climate Risk Tool provides important insights on a company’s upside and downside performance potential that will be directly influenced by how the company responds to climate-related risks in its business strategy. This information can inform our corporate stewardship efforts. Protein producers will be directly impacted by global warming and the model shows how important it is to take alleviating measures now.”

Jeroom Remmers, Director of the True Animal Protein Price Coalition (TAPP) said, “Since FAIRR’s 2017 report on meat taxation, the conversation around pricing meat across Europe has shifted completely. Crucially, The TAPP Coalition has found that the majority of consumers will now support meat taxes, if other food products like vegetables are lowered in price, and policymakers like the EU Commission are more receptive than ever.
It’s vital that investors like the FAIRR network get behind the cause and use their influence to ensure that food prices reflect the real costs of pollution, emissions and deforestation in their supply chains.”

About the FAIRR Initiative
The FAIRR Initiative is a collaborative investor network, established by the Jeremy Coller Foundation. Its mission is to build a global network of investors who are focused and engaged on the risks linked to intensive animal production within the broader food system. FAIRR helps investors to exercise their influence as responsible stewards of capital to engage and safeguard the long-term value of their investment portfolios. This is the second year of the Coller FAIRR Protein Producer Index which was shortlisted by the UN-supported Principles for Responsible Investment as ESG Research Report of the Year.