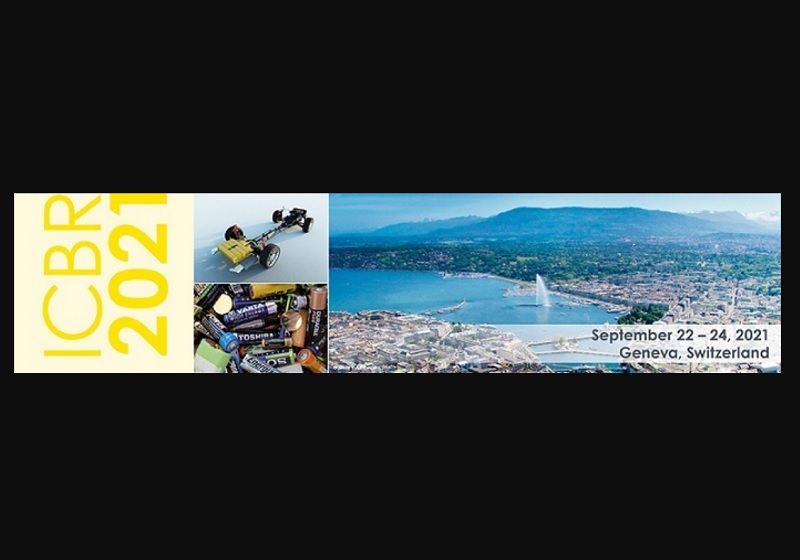 ICBR Lithium batteries treatment. Jacques David talks about the management of the so-called Black Mass produced from the treatment of lithium batteries ahead of the workshop at ICBR 2021 in Geneva on 24th September.

Jacques David is a true battery recycling pioneer
He started to collect and recycle batteries in 1977, many years before any legislative support would incite the return of spent batteries or enable him to collect batteries with a recycling fee included. Jacques became renowned internationally as he developed a successful international network for the French recycling company SNAM for 28 years. After his retirement from SNAM, he ran SCRELEC for eight years, collecting and recycling primary and rechargeable batteries in France.
After his industrial career, he became a consultant in 2013, advising and supporting the battery recycling community in its efforts to accompany the growing development of the primary and rechargeable battery collection and recycling business. Currently he is still actively consulting as « Just Different. His contribution to finding a solution to the Black Mass issue is a current example of Jacques’ continuing commitment to the battery collection and recycling industry.

ICM: What is Black Mass actually?
Jacques David: Black Mass is what you obtain once a battery has been processed for recycling. Batteries are composed of metals including lithium, manganese, cobalt, and nickel. Once a battery reaches the end of its service life, it is collected, dismantled, and shredded. The shredded material is then processed to produce “black mass”, which contains high amounts of these metals. These critical materials can then be extracted from the black mass and re-used in new battery production or in new products and/or applications.

ICM: Can Black Mass processing be a profitable operation?
JD: Depending on the content, yes it can. If a battery contains cobalt and nickel in certain quantities, then there will be no need to financially support the recycling operation.

ICM: Where are the major recycling facilities located today?
JD: In China, Japan and South Korea there are large treatment facilities for batteries and battery waste, sometimes dealing with more than 50 000 tons per year. Many of these facilities have integrated the treatment of Black Mass mainly using a hydro-metallurgical process, which enables them to produce salts or metallic hydroxides which can be used as precursors.

ICM: What about European recyclers?
JD: In Europe the recyclers have traditionally concentrated on battery recycling and have been waiting for bigger volumes of spent Li-ion batteries to become available before increasing capacity. Despite increasing volumes of Li-ion batteries needing recycling, the majority of the available tonnage comes from production waste from EV battery manufacturing or assembly facilities today. Challenges remain in order to reach the scale of Chinese capacity for Black Mass treatment.

ICM: What are the main challenges for EU operators?
JD: European collectors and recyclers have always faced a lack of harmonization between different member States of the classification of spent Li-ion batteries. This creates a barrier to the development of the recycling market.
The expansion of Chinese battery and electric vehicle manufacturers operating in Europe will continue to give these companies a head start in the Black Mass recycling market here, and the developing practice of exporting Black Mass to Asia and the USA is certainly set to continue.

ICM: Is Black Mass waste?
JD: Today, there is a lack of coherence between the various approaches to the definition of products coming from the treatment of waste batteries (Waste Directive Classification – Waste Batteries Directive – Chemicals Policy (EchA)). There is definitively a need for harmonization of the classification of spent batteries as a source of active materials to be used in new batteries or new applications. In the context of the EU Circular Economy Policy, the various precursors need to receive the same classification among EU Member States and among the international community.

ICBR 2021 workshop 24th September 2021 on “How to integrate black mass into a circular economy of lithium-ion batteries”
The workshop at ICBR 2021 will be moderated by Dr Claude Chanson (RECHARGE) with the participation of Dr Alain Vassart (EBRA) and Dr Reiner Sojka (ACCUREC Recycling GmbH) as experts. Other experts will also contribute.

Lithium-ion battery processing at end of life produces a black mass, a source of critical raw materials. According to the EU Waste Legislation this black mass could be qualified as waste or non-waste. The workshop will cover the description of various types of black mass and their composition and properties, as well as the potential treatment processes. The classification criteria will be reviewed in order to evaluate how they fit into the new Batteries Regulation objectives of recycling efficiency, recovery rates and recycled content.
During the workshop, practical cases will be illustrated where operators have difficulties implementing the Transport Regulation for certain categories of waste batteries and battery materials and selecting the required packaging and shipping instructions, mainly taking into consideration the composition of waste batteries and their physical status prior to shipment.
The workshop conclusions and clarifications will form the basis of recommendations to be carried by industry to the EU competent authorities during the future review of the Waste Framework Directive.

ICM AG is the international leader in circular economy congress organisation, specialising in vehicle, electronics and battery recycling as well as e-mobility; some of the fastest-growing markets and waste streams in the world.
Headquartered in Switzerland, ICM has been organising conferences in Europe, North America and Asia since 2000. Jeanette Duttlinger, the company founder, manages a team of 15 people who speak English, Chinese, Spanish, French, Italian, German and Polish.