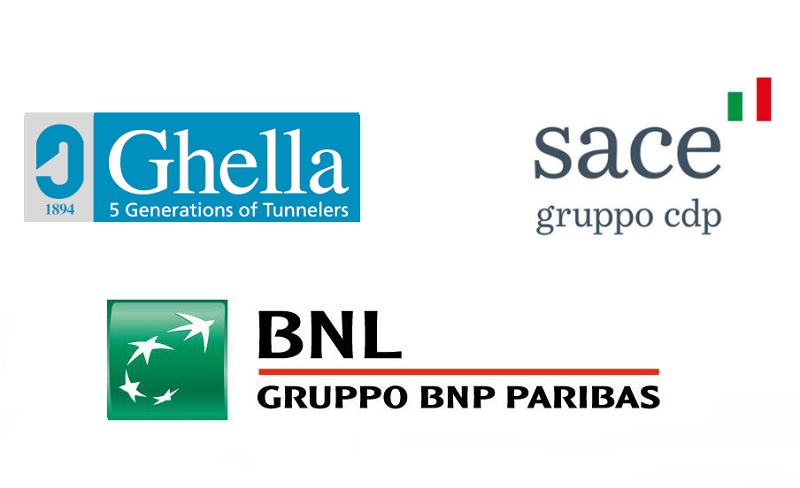 The new operation directed by SACE and funded by BNL Gruppo BNP Paribas for the Green New Deal – the European plan that promotes a Circular Europe: modern, sustainable and resilient – is intended for Ghella’s “green” investments. Ghella is an international reality of primary importance in the construction of major infrastructure worldwide. SACE, the company led by Pierfrancesco Latini has been called to play a key role with its “green” guarantees as foreseen by the Decree-Law “Semplificazioni” (76/2020).

The Green Loan, for a total of 40 million euros, has a duration of 5 years and is intended to support a wide plan of “green” investments for an overall value of approximately 100 million euros. The loan embraces diverse fields from the urban regeneration to transportation infrastructure and the renewables sector.

With this operation Ghella achieves a primacy: it is as a matter of fact the first Green Loan, covered by SACE’s guarantees, obtained by a construction company and granted by BNL Gruppo BNP Paribas for Green Projects which have a positive impact in regard to environmental sustainability and with special attention to the mitigation of climate change.

SACE continues in its commitment to supporting the competitiveness of Italian companies thanks to its renewed attention and strong ability to intervene in the green scope. BNL continues to offer financial solutions that sustain the business of companies but also the environmental, social and economic sustainability according to the “Positive Banking” strategy of the Bank and the Group.

As a matter of fact, Ghella confirms itself as committed, at the forefront of sustainable and innovation themes, pursued through the creation of an array of shared values for the company and all the Stakeholders involved.

One of the characteristic aspects of this financing transaction is an innovative pricing mechanism which, through a discount on the rate, incentivizes the company to achieve specific Sustainability Objectives.

“This operation – says Marco Tummarello, CFO of Ghella – confirms, on one side, the common vision of BNL Gruppo BNP Paribas, SACE and Ghella drawn towards the realization of a more sustainable economy and on the other side the acknowledgment, by the financial community, of our economic strength. Our first Green financing represents a step forward in our path towards sustainability. 2020 has seen us obtain the Platinum Ecovadis evaluation in the CRS field and the first EPD (Environmental Product Declaration) certification in the world for the evaluation of the environmental impacts of a precast concrete ring. We are on track and will continue, with confidence, to renovate our commitment for a sustainable future’.

Regina Corradini D’Arienzo, Responsible for the BNL Corporate Banking Division: “The support of BNL Gruppo BNP Paribas to the Ghella’s “green” plans is in line with our support strategy towards a healthier economy alongside modern Italian companies which are committed to a sustainable development that safeguards the environment in which they are active but which are also careful about the wellbeing of people and the new generations for a better future. We are pleased, as a bank and international group, to be able to act, with this approach together with SACE in the context of the Green New Deal”.

“Sustainability represents today not only a necessity but also a great opportunity of investment growth and occupation – says Dario Liguti, Chief Underwriting Officer of SACE – we are proud to pursue, with this operation, on the side of Ghella, an international reality of primary importance in the construction of major infrastructure worldwide which is already at the forefront of themes that relate to sustainability and innovation, our commitment for the Italian Green New Deal. moreover we are glad to have done so in synergy with BNL Gruppo BNP Paribas, with whom we wish to continue working with, in the future, on green projects”.

The investment plan sustained from the Green Loan and thanks to the synergy between SACE and BNL, includes the realization of the Brenner Base Tunnel which, together with the already existing ring road of Innsbruck, will reach an overall length of 64 km, becoming longest the underground railway connection in the world. The intervention insists on the HS railway Monaco – Verona, a key infrastructure of the Trans-European Transport Network and belonging in the environmental objective of the European Green New Deal on a sustainable mobility. Moreover, part of the plan in also the creation of a Ghella Meeting Center in its Roman HQ, inspired by Eco sustainable criteria, energetic efficiency and circular economy with the objective to contribute to the urban regeneration. The building, made with sustainable materials and a large garden on the roof has been awarded, on an international level, as the first Leed Platinum in Italy.

BNL Gruppo BNP Paribas and SACE have been supported from the energy project finance legal team of Orrick.

GHELLA
Founded in 1894, Ghella is a leading Company in the construction of major infrastructure projects worldwide. With its unique skills and experience in underground works, Ghella is involved in the construction of many infrastructure projects such as subways, railways, motorways and major roads, significant water and hydraulic works.
The Company has most of its workload in the international markets, mainly in Oceania, Far East, Latin America and Europe. The Company has a presence on a global scale with a workforce of over 3,600 people.
With the use of modern technologies, continuous training program for the workforce, development of innovative productive methods combined with the highest attention to safety and environmental requirements, Ghella has completed complex engineering works that have contributed to the Company’s dynamic and steady growth as well as the social and economic development of the territories in which it operates.
Along with its presence in major infrastructure works, Ghella is involved in the renewable energies sector, with the development, construction and operation of renewable sources production plants, mainly photovoltaic and hydroelectric, in Italy, Central America and the Middle East.
At the end of 2020, Ghella presents a work portfolio which is 90% composed of projects that contribute to the advancement of sustainable development objectives of the United Nations.

BNL
BNL, with over 100 years of activy, is one of the main italian banking groups but also among the most known brands in Italy. BNL is present along the entire national territory with branches, Private Banking subsidiaries, entreprise centers “Creo BNL per l’Imprenditore” and Corporate Banking and public amministration affiliates. BNL offers a wide range of solutions, products and services, from the most traditional to the most innovative, to satisfy the numerous requests of its clients (private, families, entreprises, entities and institutions). BNL is, since 2006, within BNP Paribas, a group present in 71 countries with 199.000 employees, 151.000 of which in Europe where it has four domestic markets: Belgium, France, Italy and Luxemburg. BNP Paribas detains a key position in its major sectors of activity: Domestic Markets and International Financial Services (the retail banking networks and the financial services are included from the Retail and Banking services) and Corporate and Institutional Banking. BNL in particularly involved, likewise the whole BNP Parisbas group, on economic, social and environmental sustainability issues: a #PositiveBanking stategy that aims to synthesize the ambition of the Bank to generate, through their business, a positive impact on their clients, collaborators and the entire community, contributing to a more sustainable future.

SACE
Is the Italian insurance-financial company specialized in supporting companies and the national economic framework through a broad range of tools and solutions to sustain the Italian and worldwide competitiveness.
For more than 40 years SACE has been the key partner for all those Italian companies which export and grow in foreign markets. Moreover, it supports the banking system to facilitate, with its financial guarantees, the access to companies’ credits, with a strengthened role thanks to the extraordinary measures foreseen by the ‘Decreto Liquidità’. With a portfolio of insured operations and guaranteed investments of 134 billion euros, SACE serves over 23 thousand companies, especially PMI, supporting their growth in Italy but also in approximately 200 foreign markets with a diverse range of insurance and financial products and services.