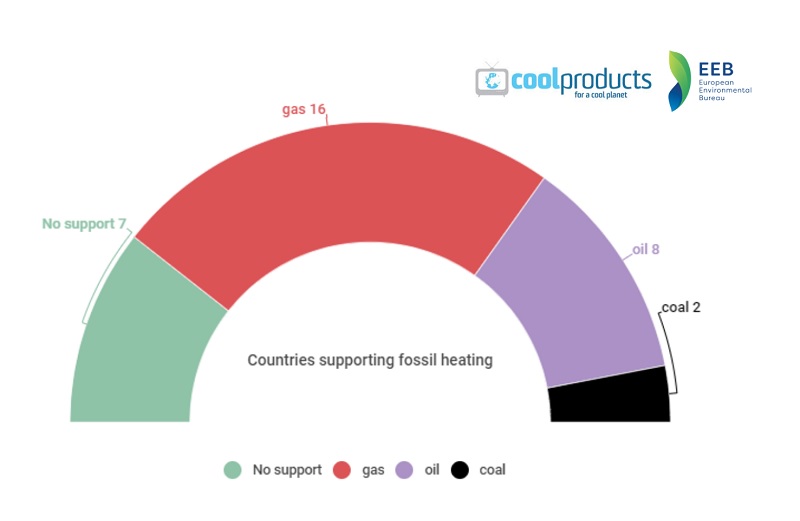 EU Gov. keep fueling dirty heating. Ahead of ‘Fit for 55’, a new analysis shows that 16 out of 27 member states are still financing fossil fuel heating, despite calls to phase out gas boilers by 2025 to achieve EU climate neutrality goals.
These dirty subsidies cripple the deployment of clean heating technologies such as heat pumps and solar thermal devices.

This year, only 7 countries, Croatia, Estonia, Ireland, Lithuania, Luxembourg, Malta and the Netherlands, have cut off public funding to gas, coal and oil heating, as the latest analysis by the European Environmental Bureau (EEB) on behalf of Coolproducts campaign shows.
Findings reveal that 16 EU governments still incentivise the purchase and/or installation of new gas boilers through various tax reductions, loans and grants, which range between €200 and €2,500 and are supposedly aimed at greening our homes. Moreover, 9 are still promoting oil heating and there are still 2 of them where coal heating can still be subsidised.

Time is running out for the European Union to decarbonise the heating sector, which is the easiest and the most urgent to decarbonise as it is responsible for half of the EU’s annual energy consumption and a third of its CO2 emissions.

A month ago, the International Energy Agency endorsed one of the main claims of Coolproducts: we will not reach climate neutrality by 2050 if we do not ban fossil fuel boilers by 2025. The European Parliament just voted for pushing EU member states to end fossil fuel subsidies by 2025.

A recent report of ECOS for the coolproducts campaign showed fossil heating technologies face bans only in a few member states and concludes that this process can only gain momentum if the European institutions speed up the decarbonisation process.

Even major EU energy groups recently called on the European Union to favour decarbonisation through electrification of heating over fossil fuel solutions, arguing that heat pumps can be deployed on a large scale in Europe without jeopardising electric grid stability, a false argument that the gas lobby has been spreading.

Despite these winds of change over the sector, boosted by the launch of the ‘Fit for 55’ package, EU governments are not doing their part in the decarbonisation of heating. The slow uptake of clean heating at national level, namely the huge amounts of fossil fuel subsidies reducing the cost of gas heating, and the slow insulation rates in some countries are hindering the huge potential of renewables.

Facts and figures
– 16 out 27 member states today still finance gas boilers, 8 oil boilers and 2 still fund coal boilers.14 EU governments finance hybrid solutions that combine both fossil and renewable heating.
– In all member states, analyses show ground-source heat pumps working on electricity from the grid largely decrease CO2 emissions.
– At EU level, a standard family switching from a gas boiler to a heat pump or to solar thermal heating can save more than 60% of the CO2 emissions
– The final purchase cost of fossil technology is still lower than renewable heating technology due to fossil incentives and poor subsidy schemes for renewables in all EU countries.
– Germany, Ireland, Spain and Finland are the countries where heat pump installation is more affordable but still more than twice as expensive as fossil boilers.
– Renewable schemes are very different from country to country and often difficult to get or time-limited, thus creating disproportionate gaps in treatments of households willing to embrace renewables
– Heat pumps with low Global Warming Potential refrigerants perform better on CO2 emissions and are to be preferred over those working on climate-harming refrigerants

Davide Sabbadin, a Policy Officer at the European Environmental Bureau (EEB), said: “At the eve of ‘For 55’, it’s scandalous that Member States continue to pour public money into fossil fuels in the sector that should be the first to decarbonise, as it is the one where technology has been there for years and the market is more than ready. The uneven landscape of renewable energy subsidies creates a broken EU, where families least positioned, generally in coal-dependent countries, are left behind in the transition to clean heating.”

Nerea Ruiz Fuente, Policy Director at ECOS – Environmental Coalition on Standards, said: “Boilers are long-lasting devices, often in service for 25 years or more. The maths is simple: to be climate neutral by 2050, we need to stop installing fossil fuel boilers by 2025. Alternatives such as heat pumps are already available and cost-effective, so it is unacceptable that public money is channelled into keeping us locked in polluting technologies. The Commission has powerful tools, such as ecodesign, at its disposal. We cannot afford for ‘Fit For 55’ to be a missed opportunity.”