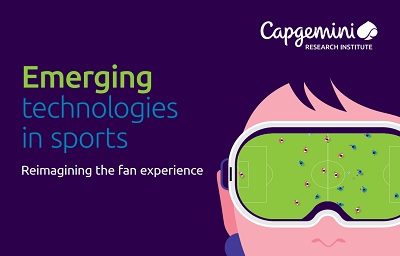 Emerging Tech in Sports Report. Capgemini’s new report reveals that emerging technology is an integral part of how fans consume sports. While positive fan experiences with technology bring multiple new opportunities to sports organizations, athletes are increasingly using it for training, injury prevention and improving performance
Capgemini, the official Global Innovation Partner of the Men’s and Women’s HSBC World Rugby Sevens Series since January 2018, has launched a new report, Emerging technologies in sports: reimagining the fan experience. The study, using responses from over 10,000 fans around the globe who regularly watch and follow top sports, has been produced by the Capgemini Research Institute.

The study shows that for 69% of fans, the use of emerging technologies, such as virtual reality (VR), artificial intelligence (AI) and augmented reality (AR), has enhanced their overall viewing experience both inside and outside the stadium; a positive experience with technologies also enhances overall fan engagement. Of respondents who liked their technology experiences, 56% said they would actually go to more physical matches at their team’s stadium as a result, and 60% said they would stream more matches online. Nearly half of fans (49%) have often increased their spending on team merchandise following a good experience and 42% have increased this spend a few times, while 92% said they increased their spend on online subscriptions for watching matches (either often or a few times). The report also shows that fans who have experienced emerging technologies during a recent visit to a stadium are more satisfied with their experience overall, highlighting a 25-point NPS®[1] (Net Promoter Score) difference between fans who have experienced emerging technologies and those who have not.

Sports fans from Asian countries lead in using emerging technologies
Fans from Asian countries – including India, Hong Kong, and Singapore – lead in the adoption and acceptance of emerging technologies in sports. Close to three-quarters of Asian fans (74%) have experienced the use of emerging technology in the stadium, with India leading at 88%. However, this drops to 56% for the United States, 50% for Germany, and below 50% each for Canada, France, United Kingdom and Australia. Furthermore, 71% of Asian fans said they would be willing to pay more if new technologies enhanced their stadium experience, compared to 40% of North American fans, 34% of European fans, and 33% of Australian fans.

Adoption of emerging technologies can convert more followers into avid fans
Emerging technologies can also convert and upgrade more fans to become avid fans[2] who generate more business and positive word-of-mouth on having a good tech-enabled sports experience. For example, 73% of avid fans attend more matches following a good tech-enabled experience, compared to 50% of the rest, and nearly three-quarters of avid fans watch a match in the stadium when their favorite team is playing.

Emerging technologies are helping athletes perform better and avoid injuries
Athletes are increasingly using a variety of emerging technologies for activities, including training, injury prevention and tracking performance. For example, Zone7, a company using data and analytics for identifying and avoiding potential career-threatening injuries to athletes, has achieved 95% accuracy in predicting injuries and has been able to reduce potential injuries by 75%[3].

Tom Mitchell, Captain of England’s Rugby Sevens Team said, “The use of virtual reality in reviewing training sessions and matches can have a big impact on sports. If you can put yourself in a given situation instead of just reviewing a match by watching a video, then the learning and reviewing experience becomes much more real. If you are able to be in that situation again, either through VR or another technology, it would be a massive step up in terms of the reviewing and learning experience.”

Strategies to unlock the value of emerging technologies in sports
Sports organizations across the world are now presented with a huge opportunity to tap into evolving consumer expectations and make far more customized and personalized fan engagement. According to the new report, organizations can focus on the following areas to adopt and optimize emerging technologies in sports:
– Reassure fans on usage of personal data by seeking consent where possible on use of data, being transparent about the use and protection of consumer data, and demonstrating the value that consumers stand to gain with this data exchange,
– Identify user needs before investing in and deploying emerging technologies,
– Convert more fans to ‘avid fans’ by defining a digital fan experience and offering ‘hyper-personalized’ experiences,
– Build digital practices, capabilities, and transform organizational culture by investing in a digital culture, skills, and cross-sharing of information across sports organizations to drive greater innovation.

Darshan Shankavaram, Global Digital Customer Experience Practice Leader at Capgemini, said, “The use of emerging technologies in the fan experience is an exciting and rapidly growing area. Sports organizations across the world have a huge opportunity to tap into evolving expectations of fans and athletes to build a more joined up, customized and personalized engagement experience. Additionally, organizations can benefit by using technology to improve players’ performance or prevent injuries, or for coaches to strategize the play through simulations.”

Report methodology
The Capgemini Research Institute surveyed 10,363 sports fans across 9 countries about the impact of digital technologies on fans and the future of sport. The Institute also conducted in-depth interviews with over 20 industry experts, sports athletes, and startup executives to understand how digital technologies can improve athletes’ performances.

About Capgemini
A global leader in consulting, technology services and digital transformation, Capgemini is at the forefront of innovation to address the entire breadth of clients’ opportunities in the evolving world of cloud, digital and platforms. Building on its strong 50-year heritage and deep industry-specific expertise, Capgemini enables organizations to realize their business ambitions through an array of services from strategy to operations. Capgemini is driven by the conviction that the business value of technology comes from and through people. It is a multicultural company of over 200,000 team members in more than 40 countries. The Group reported 2018 global revenues of EUR 13.2 billion (about $15.6 billion USD at 2018 average rate).
Capgemini has contributed to the world of rugby for over 25 years, supporting grass-roots teams, national clubs, and on the international stage as a sponsor of the 2007 Rugby World Cup. Its visionary founder, the late Serge Kampf, was a lifelong rugby fan and sponsor of the sport. Since 2018, Capgemini has been the official Global Innovation Partner of the Men’s and Women’s HSBC World Rugby Sevens Series.

About the Capgemini Research Institute
The Capgemini Research Institute is Capgemini’s in-house think-tank on all things digital. The Institute publishes research on the impact of digital technologies on large traditional businesses. The team draws on the worldwide network of Capgemini experts and works closely with academic and technology partners. The Institute has dedicated research centers in India, the United Kingdom and the United States. It was recently ranked #1 in the world for the quality of its research by independent analysts.