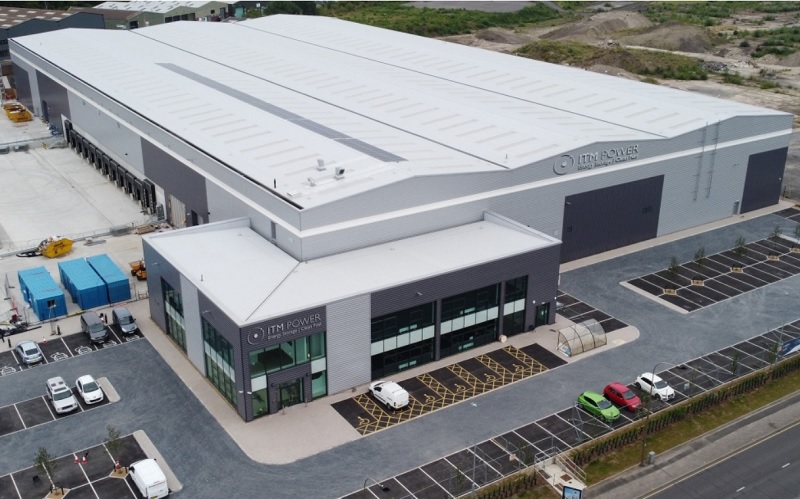 Electrolysers ITM Power’s new 1GW plant, in Sheffield, northern England. ITM Power, the energy storage and clean fuel company, announces an update on the fit out and opening of the Company’s first Gigafactory at Bessemer Park in Sheffield.

The fit out of the 1GW (1,000MW) per annum Gigafactory at Bessemer Park has now reached ‘Practical Completion’ – the handover to the Company by the contractors of the completed building – having suffered only a minor delay from the Covid-19 pandemic. The completed fit out included an expansion of the existing offices, enlargement of the stack manufacturing and production areas and a dedicated ATEX rated space for factory acceptance testing of products, all coupled with the necessary 5MW power supply on site.

The Gigafactory also houses the 24 hour remote and technical monitoring centre that will support ITM Power’s after-sales service proposition, the Marketing centre, Technology centre and component stores. The site, just off J34 of the M1 in Sheffield will welcome visitors in the near future, with the creation of a conferencing facility, as well as a Hydrogen Academy to support the training of apprentices, local engineers and customers, together with facilities for site visits by customers, shareholders, investors and other stakeholders.

The ITM Power Gigafactory delivers a blueprint for a high capacity, semi-automated PEM electrolyser manufacturing facility, which can be readily replicated, enabling a local facility to be planned and rapidly deployed in response to large order volumes.

About ITM Power plc
ITM Power (AIM: ITM) plc manufactures integrated hydrogen energy solutions for grid balancing, energy storage and the production of renewable hydrogen for transport, renewable heat and chemicals. ITM Power plc was admitted to the AIM market of the London Stock Exchange in 2004. In October 2019, the Company announced the completion of a £58.8 million fundraising, including an investment by Linde of £38 million, together with the formation of a joint venture with Linde to focus on delivering renewable hydrogen to large-scale industrial projects worldwide. In November 2020, ITM Power completed a £172m fundraising, including a £30m investment by Snam, one of the world’s leading energy infrastructure operators. ITM Power signed a forecourt siting agreement with Shell for hydrogen refuelling stations in September 2015 (which was extended in May 2019 to include buses, trucks, trains and ships), and in January 2018 a deal to deploy a 10MW electrolyser at Shell’s Rhineland refinery. ITM Power announced the lease of the world’s largest electrolyser factory in Sheffield with a capacity of 1GW (1,000MW) per annum in July 2019. Customers and partners include Sumitomo, Ørsted, Phillips 66, National Grid, Cadent, Northern Gas Networks, Gasunie, RWE, Engie, BOC Linde, Toyota, Honda, Hyundai and Anglo American among others.