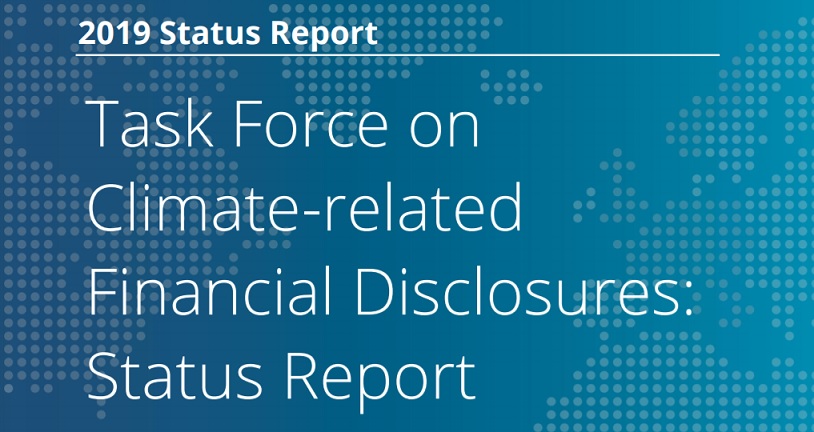 Climate-Finance-Related Report. Second TCFD Status Report Shows Steady Increase in TCFD Adoption. Nearly 800 organizations have now expressed support for the TCFD and its recommendations.
The Task Force on Climate-related Financial Disclosures (TCFD) published its 2019 Status Report to the Financial Stability Board (FSB). The TCFD’s second status report provides an overview of disclosure practices aligned with the Task Force’s recommendations between 2016 and 2018.

The report also examines the decision-usefulness of existing climate-related financial disclosures to users of disclosure, and evaluates disclosures of strategy resilience and the challenges faced by preparers using scenario analysis.
At the time of publication, nearly 800 organizations have expressed their support for the TCFD recommendations, a more than 50% increase from the publication of the first status report in September 2018.

An artificial intelligence (AI) review of reports from over 1,100 large companies across multiple sectors in 142 countries found that the average number of recommended disclosures per company has increased by 29% from 2.8 in 2016 to 3.6 in 2018.
At the same time, the percentage of companies that disclosed information aligned with at least one of the Task Force’s recommendations grew from 70% in 2016 to 78% in 2018.

The Task Force also conducted a survey on companies’ efforts to implement the recommendations. Ninety-one percent of the 198 survey respondents that identified as preparers of disclosure have decided to “fully” or “partially” implement the TCFD recommendations, with 67% stating their companies plan to complete implementation within three years.
Seventy-six percent of users stated that they are already using climate-related financial disclosures in their decision making process. The survey received a total of 485 responses.

“We remain encouraged by the continued growth in the number of companies adhering to the guidelines of the TCFD – it means businesses are better informed about the risks they face, and investors are more capable of making sound decisions,” said Michael R. Bloomberg, Chair of the Task Force and Founder of Bloomberg LP and Bloomberg Philanthropies. “However, we’re also clear-eyed about the serious threat that climate change poses. In order to keep people out of harm’s way, and build a more resilient global economy, we need more companies to follow their lead – and soon.”

While the commitment to implementation is encouraging, actual disclosure still faces challenges. Most notably the preparers surveyed find disclosing scenario analysis assumptions difficult and lack standardized metrics and targets.
Respondents that identify as users, on the other hand, ask for more clarity on the financial impact of climate-related issues on companies, which would help to make the disclosures more decision-useful.
Overall, more companies beyond the ones that have traditionally been engaged on climate-related issues need to start their disclosure journey.

“We see extensive and mounting evidence that the physical and transition effects of the climate crisis are real. In order to reach the goals of the Paris Agreement we need to take forceful action – this includes action from corporations and the private sector at large,” commented Mary Schapiro, Special Advisor to the TCFD Chair and Vice Chair for Global Public Policy at Bloomberg LP. “Climate-related disclosures and the TCFD recommendations help companies consider the impact of climate change and associated mitigation efforts on their strategies and operations. A company that communicates its climate resiliency to its investors will have a competitive advantage over those that don’t.”

The list of 785 TCFD supporters includes 374 financial and 297 non-financial companies, with a combined market capitalization of nearly $9.3 trillion. The supporting financial firms are responsible for assets of nearly $118 trillion.
Supporters also include 114 other organizations, such as trade associations, financial and insurance supervisors and regulators, governments and ministries. Supporters are headquartered across 49 countries.

Speaking about the publication of the report, FSB Chair Randal K. Quarles said: “The Task Force continues to provide a forum for market participants to develop and use a valuable private-sector solution to assess climate-related business risks. The increased participation levels confirm the value of these voluntary disclosures, allowing the public, markets, and investors to better monitor risks.”

The Task Force will continue its work on promoting and monitoring adoption of its recommendations with a focus on areas that have proven challenging for implementation. The Task Force will deliver its next status report to the FSB in September 2020.

Companies and others can express their interest in supporting the TCFD recommendations via online form. The full list of current companies and organizations supporting the work of the Task Force is viewable and supportive quotes are viewable here.
Companies considering implementing the TCFD recommendations are encouraged to visit the TCFD Knowledge Hub to access more than 470 relevant resources, including case studies.

About the Task Force on Climate-related Financial Disclosures
On December 4, 2015, the Financial Stability Board (FSB) established the industry-led Task Force on Climate-related Financial Disclosures (TCFD) with Michael R. Bloomberg as Chair.
The Task Force currently has three Vice Chairs and 29 members in total. The TCFD was asked to develop voluntary, consistent climate-related financial disclosures for use by companies in providing information to lenders, insurers, investors and other stakeholders, which were published in the TCFD Recommendations Report on June 29, 2017.