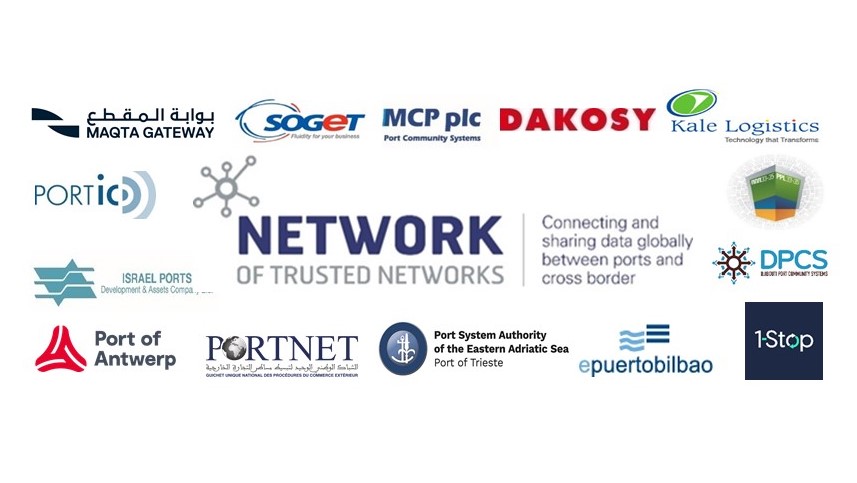 An innovative new concept for enabling port-to-port and cross-border exchange of data is being trialled by the International Port Community Systems Association (IPCSA) – in a two-year project covering up to 70 ports, ten airports and multiple inland terminals.
– The purpose – to provide predictability, visibility and certainty within the supply chain.
– The priority – to respond to the requirement of consumers and logistics companies for real-time, end-to-end information on their shipments.
– The unique advantage – a trusted and neutral solution.
When it comes to providing this kind of cross-border solution, others have tried to deliver such a concept – but the key stumbling block is always ‘trust’. Where others are aiming to get direct users on board, IPCSA’s Network of Trusted Networks (NoTN) takes a different approach. NoTN users will be trusted, neutral platforms such as Port Community Systems, Cargo Community Systems and Single Window operators.

“It is a trusted network because it isn’t going to the ‘end user’,” says IPCSA chairman Hans Rook. “The user is already identified and authenticated by the network. The platforms will only share data that they are allowed to share by their user. Thus the NoTN maintains the principle of commercial confidentiality, which is the cornerstone of Port Community System and Single Window operators.
The benefits will be for the end-user. For example, if you have a shipment coming from Morocco into a UK port, you will be able to find out through your PCS whether your container has been loaded on the vessel, when it departed and when it is estimated to arrive in the UK port.”

The NoTN is being launched as a two-year proof-of-concept project, with 14 IPCSA members taking part in the pilot.

“IPCSA and its members has been considering how best to enable port-to-port and cross-border information,” says IPCSA secretary general Richard Morton. “We have clearly identified that not all the problems are technical. In fact, some of the biggest problems are legal agreements between parties. In our daily lives we think nothing of downloading and using Apps – we considered how we could use this model for simplifying the exchange of information. This is what IPCSA is addressing in its proof-of-concept NoTN. The aim is to create simple cross-border exchanges and enable transparency through the supply chain.”

The two-year proof of concept will involve members learning and assessing value user cases, he explains. “We have 14 IPCSA members from across the world taking part in the initial phase are. Between them, they cover 70 ports, ten airports and multiple inland terminals.”

In the initial phase, IPCSA is creating and building the concept based on the two ‘Track and Trace’ APIs it has developed for vessel status and container status. The system, always restricted to platform-to-platform, also provides for standardised and simplified contractual arrangements and transparent fee negotiation between the ports or PCSs. No data is stored, and all data is encrypted.

“The whole concept is driven by the platforms – not by IPCSA, which remains the completely neutral facilitator between them,” says Richard Morton. “The proof of concept is looking at how this develops, and we will evaluate and refine as needed.
In the past, PCSs have generally only operated in their ‘local’ environment, supporting their direct customers, to simplify trade flow.
IPCSA’s NoTN gives them the opportunity to extend their service to give more information from different points in the supply chain, thereby enhancing their value. For the end user, it is all about transparency and knowing where your container is.”

The technical provider for the NoTN proof of concept is API first, data sharing platform NxtPort. As the facilitator, IPCSA has tailored the NxtPort offering to suit the neutrality of the NoTN initiative.

Hans Rook says: “The objective is to set up a neutral, global, scalable and collaborative solution among PCSs, to share and exchange data port-to-port and cross-border and to simplify the associated administrative and technical solutions. We are very excited about the concept; by using existing technology to link IPCSA members, we will enable them to share data for the benefit of the whole supply chain.”

About IPCSA
IPCSA is an international association of sea and air port community operators, sea and air port authorities and single window operators that is recognised across the globe for providing advice and guidance on the electronic exchange of information across borders and throughout the whole supply chain.
The association currently has members from across the globe who handle the exchange of information for Business to Business, Government to Business and Government to Government processes and facilitate the smooth cross-border movement of goods. This equates to the electronic exchange of information relating to more than 500 million TEU movements and 10 billion tonnes of cargo for air, sea and land transport – estimated to be in excess of 50 billion million exchanges every year.
IPCSA focuses on supporting and facilitating systems and innovations for Port Community System members and users, and promoting the use of international data standards in sea and air ports, at border crossings and via Single Window systems around the world. IPCSA is a recognised NGO with consultative status at UNECOSOC and IMO.

The PROTECT Group, develops and supports the electronic reporting required by authorities for vessels entering or leaving a port or port area. It maintains and develops EDI through the PROTECT Guide. In January 2020 PROTECT integrated into IPCSA