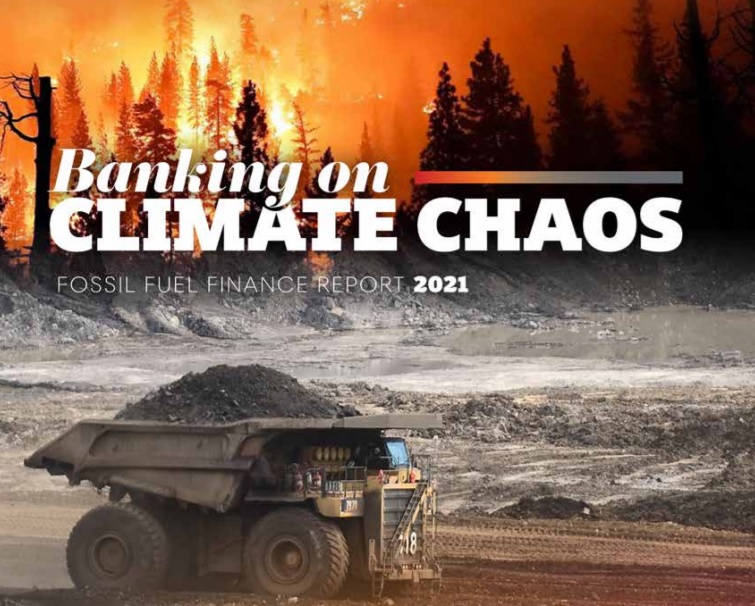 The 12th edition of the most comprehensive report on fossil fuel bank financing documents an alarming disconnect between the global scientific consensus on climate change and the continued practices of the world’s largest banks.
This year’s report, titled “Banking on Climate Chaos 2021″, expands its focus from 35 to 60 of the world’s largest banks and reveals that in the 5 years since the Paris Agreement was adopted, these banks have pumped over $3.8 trillion into the fossil fuel industry.

The report also concludes that fossil fuel financing was higher in 2020 than in 2016, a trend that stands in direct opposition to the Agreement’s stated goal of rapidly reducing carbon emissions with the aim to limit global temperature rise to 1.5° Celsius.

The report demonstrates that, even amidst a pandemic-induced recession that resulted in an across-the-board reduction of fossil fuel financing of roughly 9%, the world’s 60 largest banks still increased their financing in 2020 to the 100 companies most responsible for fossil fuel expansion by over 10%.
These banks have poured nearly $1.5 trillion over the past 5 years into 100 top companies expanding fossil fuels.
This includes companies behind highly controversial projects like the Line 3 tar sands oil pipeline and the expansion of fracking on the land of Indigenous Mapuche communities in Argentina’s Patagonia region, which are just two of the nearly 20 case studies featured in the report.

“Banking on Climate Chaos” was authored by Rainforest Action Network, BankTrack, Indigenous Environmental Network, Oil Change International, Reclaim Finance and Sierra Club, and is endorsed by over 300 organizations from 50 countries around the world.

U.S.-based banks continue to be the largest global drivers of emissions in 2020, with JPMorgan Chase remaining the world’s worst fossil bank. Chase recently committed to align its financing with the Paris Agreement and yet continues essentially unrestrained financing of fossil fuels. From 2016 through 2020, Chase’s lending and underwriting activities have provided nearly $317 billion to fossil fuels, fully 33% more than Citi, the next worst fossil bank over this period.

Wells Fargo’s total fossil financing plunged by a surprising 42% in 2020. As a result, Wells dropped from fourth-worst fossil bank in 2019, to ninth worst in 2020. This is the only time over the past five years that Wells has not been one of the worst four fossil banks.
Another surprising result from the 2020 data is that BNP Paribas (whose U.S. subsidiary is Bank of the West, which strongly advertises its supposed responsibility on climate) came in as the fourth-worst fossil bank in 2020. BNP Paribas provided $41 billion in fossil financing in 2020, a huge 41% increase over its 2019 activity. This means the biggest absolute increase in fossil financing last year came from BNP Paribas, despite the bank’s strong policy commitments restricting financing for unconventional oil and gas.

The report also examines existing climate policy commitments by banks and finds them grossly insufficient and out of alignment with the goals of the Paris Agreement across the board. Recent high profile bank policies focus either on the distant and ill-defined goal of achieving ‘net zero by 2050’ or on restricting financing for unconventional fossil fuels. In general, existing bank policies are strongest with regards to restrictions for direct project-related financing. And yet, project-related financing made up only 5% of the total fossil fuel financing analyzed in this report.

The authoring organizations behind this report are united in their demand that respect for Indigenous rights, including the right to Free, Prior, and Informed Consent, and human rights more broadly must be a non-negotiable requirement for all bank financing decisions.

Rainforest Action Network – Ginger Cassady, Executive Director: “The unprecedented COVID-19 dip in global financing for fossil fuels offers the world’s largest banks a stark choice point going forward; they can decide to lock in the downward trajectory of support for the primary industry driving the climate crisis or they can recklessly snap back to business as usual as the economy recovers. U.S.-based banks continue to be the worst financiers of fossil fuels by a wide margin. Going into the Glasgow climate summit at the end of the year, the stakes could not be higher. Wall Street must act now to stop financing fossil expansion and commit to fossil zero, so as to truly align its financing practices with keeping our planet from heating up more than 1.5 degrees.”

Indigenous Environmental Network – Tom Goldtooth, Executive Director: “We must understand that by bankrolling the expansion of oil and gas the top banks of the world have blood on their hands and no amount of greenwashing, carbon markets, unproven techno-fixes, or net-zero commitments can absolve their crimes against humanity and Mother Earth. Indigenous lands globally are being plundered, our inherent rights are being violated and the value of our lives has been diminished to nothing in the face of fossil fuel expansion. For the sacredness and the territorial integrity of Mother Earth, these banks must be held accountable for covering the cost of her destruction.”

Reclaim Finance – Lucie Pinson, Founder and Executive Director: “These numbers expose the hollowness of banks’ ever-multiplying commitments to be net-zero or align with the Paris Agreement climate targets. A perfect example can be found in France. Finance Minister Bruno Le Maire is fond of calling Paris the capital of green finance – but this data exposes it as 2020’s capital of climate hypocrisy, with four unscrupulous banks making France the largest backer of oil, gas and coal in Europe. BNP Paribas merits singling out as the world’s fourth-largest fossil financier in 2020, having funnelled multi-billion dollar loans to oil giants like BP and Total. Nonetheless, it’s clear that all banks need to replace empty promises with meaningful policies enacting zero tolerance for fossil fuel developers.”

Sierra Club – Ben Cushing, Financial Advocacy Campaign Manager: “Many of the world’s largest banks, including all six major U.S. banks, have made splashy commitments in recent months to zero-out the climate impact of their financing over the next 30 years. But what matters most is what they’re doing now, and the numbers don’t lie. This report separates words from actions, and the picture it paints is alarming: major banks around the world, led by U.S. banks in particular, are fueling climate chaos by dumping trillions of dollars into the fossil fuels that are causing the crisis. Big banks don’t deserve a pat on the back if their 2050 pledges are not paired with meaningful 2021 actions to cut fossil financing.”

BankTrack – Johan Frijns, Director: “As the date of the crucial Glasgow Climate Summit approaches – and god forbid the global corona crisis prevents the world from meeting to address that other, much bigger existential crisis – we witness one bank after another making solemn promises to become ‘net zero by 2050’. There exists no pathway towards this laudable goal of a generation away that does not require dealing with bank finance for the fossil fuel industry right here and now, yet too many current promises lack precisely that; a firm commitment to start severing ties with all coal, oil and gas companies that plan on continuing their climate wrecking activities in the years to come.”

Oil Change International – Lorne Stockman, Senior Research Analyst: “This report serves as a reality check for banks that think that vague ‘net-zero’ goals are enough to stop the climate crisis. Our future goes where the money flows, and in 2020 these banks have ploughed billions into locking us into further climate chaos. Banks need to be focused on reducing fossil fuel production now, rather than on a far off and insufficient goal in the distant future. The time for half-measures is over.”

Methodology note:
This report aggregates bank lending and underwriting of debt and equity issuances according to Bloomberg’s league credit methodology (which divides credit among banks leading a transaction) to companies with any reported fossil fuel activity according to Bloomberg Finance L.P. and the Global Coal Exit List. The league credit assigned to a bank for a given transaction is adjusted by an approximation of the fossil fuel intensity of the particular borrower or issuer. Draft report findings are shared with banks in advance, and they are given an opportunity to comment on financing and policy assessments.