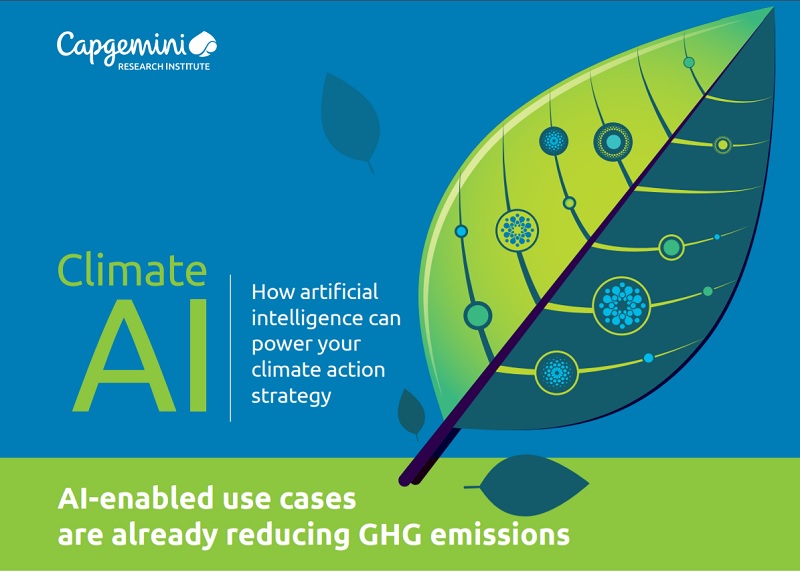 AI to Power Climate Action Strategy. Artificial Intelligence set to help organizations cut greenhouse gas emissions by 16% in the next 3-5 years. Artificial Intelligence (AI) powered use cases for climate action have the potential to help organizations fulfil up to 45% of their Economic Emission Intensity (EEI) targets of the Paris Agreement.
This is according to a new research entitled, “Climate AI: How artificial intelligence can power your climate action strategy,” from the Capgemini Research Institute, conducted in partnership with climate change start-up right. based on science. While AI offers many climate action use cases, scaled deployment is proving elusive and just 13% of organizations are successfully combining climate vision with AI capabilities.

Two-thirds (67%) of organizations have set long-term business goals to tackle climate change. While many technologies address a specific outcome, such as carbon capture or renewable sources of energy, AI can accelerate organizations’ climate action across sectors and value chains; and, adoption is on the rise as more than half of organizations (53%) are moving beyond pilots or proofs of concepts.
AI use cases include improving energy efficiency, reducing dependence on fossil fuels, and optimizing processes to aid productivity. From the 800 sustainability and tech executives surveyed in 400 organizations in the automotive, industrial/process manufacturing, energy and utilities, consumer products, and retail industries, nearly half (48%) are using AI for climate action and as a result have reduced greenhouse gas emissions (GHG) by 12.9%, improved power efficiency by 10.9% and reduced waste by 11.7% since 2017.

The potential positive impact of AI is significant
Organizations can expect to cut GHG emissions by 16% in the next three to five years through AI-driven climate action projects. Across the five sectors, the research finds that AI-powered use cases can deliver up to 45% of the Paris Accord requirement leading up to 2030. The consumer retail sector demonstrates the most potential for improvement using AI at 45% and wholesale retail the least at 11%.
By analyzing more than 70 climate action AI use cases, Capgemini identified the 10 with the biggest impact. Detailed in the report, these include energy consumption and optimization platforms, algorithms to automatically identify defects and predict failures without interrupting operations, and tracing leakages at industrial sites.

Successful deployment requires barriers to be overcome
Despite the considerable potential of AI for climate action, adoption remains low. This could be due to several barriers to progress:
– More than eight in ten organizations spend less than 5% of climate change investment on AI and data tracking
– Half (54%) have fewer than 5% of employees with the skills to take up data and AI-driven roles
– More than a third (37%) of sustainability executives have decelerated their climate goals in light of COVID-19, with the highest deceleration in the energy and utilities industry. 38% of all organizations have put a hold on capital expenditure allocated for climate initiatives.

European climate AI champions are leading the pack
Only 13% of organizations have aligned their climate vision and strategy with their AI capabilities – these are who Capgemini defines as climate AI champions. Two-fifths of these come from Europe, followed by the Americas and APAC. Climate AI champions are closer to the required Paris Agreement temperature contributions compared with their peers in both scope 1 and 2 emissions and have made considerable gains in applying AI to reduce direct emissions.
A clear knowledge gap is also emerging, as 84% of executives would rather compensate for (or offset) their carbon footprint than deploy technology solutions to reduce their footprint (16%) in the long run. This suggests a lack of awareness for AI climate action potential. According to the report organizations need to invest in AI and data science teams to understand how best to deploy AI to harness it positively for sustainability.

Leverage AI’s full climate action potential, but also consider its impact
Despite technology advances, AI systems and solutions can potentially consume a lot of power and can generate significant volumes of climate-changing carbon emissions. Before beginning to deploy AI use cases, organizations need to carefully assess the environmental impact, build greater awareness and build AI solutions with sustainability core design principles, to ensure that the benefits of their AI deployments outweigh their emissions “cost”.

“Addressing climate change is everyone’s responsibility and AI has the potential to make a significant impact, yet only a fraction of organizations are actively using this technology to its full potential,” says Anne Laure Thieullent, Vice President, Artificial Intelligence and Analytics Group Offer Leader at Capgemini. “For climate action as well, execution starts from the top of the organization, by aligning the use of data & AI to its strategic corporate agenda, with sustainability at the heart of it. Without this clear direction, there is a missing link between intention and technology prioritization and execution. Organizations have the opportunity to prioritize the deployment of AI solutions to address their sustainable goals. Frameworks now exist to educate, build awareness, establish scalable operating models, and manage data to deliver tangible business outcomes with AI applied to climate action. And of course, this requires AI solutions to be designed, built, deployed and monitored with sustainable design principles to ensure overall positive environmental impact.”

Research Methodology
Capgemini surveyed 800 executives from 400 organizations. Each organization had two respondents: one sustainability executive and one business or technology executive. As well as the survey of executives, Capgemini surveyed a panel of 300 experts: regulators, academics, and AI subject matter experts. Capgemini complemented the surveys with in-depth interviews of over 40 sustainability experts, business/tech experts, AI practitioners and startups, think tanks and academicians working in the field of AI and/or climate change. Capgemini also partnered with right. based on science, for their expertise in XDC Model Methodology, to estimate and quantify the impact of AI on GHG emissions of organizations. It is the only methodology of its kind to integrate a full climate model (also used by the UN Intergovernmental Panel on Climate Change). It is science-based, peer-reviewed, forward-looking, Task Force on Climate-related Financial Disclosures (TCFD) compatible, aligned with the EU Green Deal, transparent and Open Source (currently for academia; fully Open Source from 2021).

Capgemini is a global leader in consulting, digital transformation, technology, and engineering services. The Group is at the forefront of innovation to address the entire breadth of clients’ opportunities in the evolving world of cloud, digital and platforms. Building on its strong 50-year heritage and deep industry-specific expertise, Capgemini enables organizations to realize their business ambitions through an array of services from strategy to operations. A responsible and multicultural company of 265,000 people in nearly 50 countries, Capgemini’s purpose is to unleash human energy through technology for an inclusive and sustainable future. With Altran, the Group reported 2019 combined global revenues of €17 billion.

The Capgemini Research Institute is Capgemini’s in-house think-tank on all things digital. The Institute publishes research on the impact of digital technologies on large traditional businesses. The team draws on the worldwide network of Capgemini experts and works closely with academic and technology partners. The Institute has dedicated research centers in India, Singapore, the United Kingdom and the United States. It was recently ranked #1 in the world for the quality of its research by independent analysts.